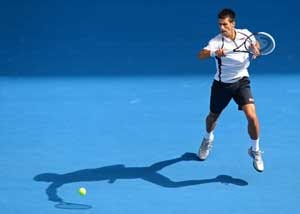 Two-time defending champion Novak Djokovic produced another majestic serving performance to power his way into the fourth round of the Australian Open on Friday.

The Serb world number one, bidding for his fourth Australian crown, didn't allow never-say-die Czech Radek Stepanek a look in as he completed a 6-4, 6-3, 7-5 victory in an entertaining 2hr 22min on Rod Laver Arena.

Djokovic has yet to drop serve in three dominating wins at this year's Open and has only had five break points against him in 43 service games.

The top seed will next face either American 20th seed Sam Querrey or Swiss 15th seed Stanislas Wawrinka in the round of 16 on Sunday.

"Radek loves the big stage. You saw how much fun he had. I also had a lot of fun playing. It was a very entertaining match," he said.

"He's very skilful, comes to the net, never gives you the same ball twice. That's something that makes him a different player from most of the guys.

"It was three close sets. I felt that I had much more chances on his serve than he had on my serve."

Stepanek kept charging in at Djokovic and ventured to the net 67 times to try to seize the initiative.

"He plays a lot of doubles with Leander Paes and he's very skilful at the net and he was not giving me a lot of rhythm. He was changing up the pace of the ball, a lot of chip and charge which not many players do these days," Djokovic said.

Stepanek chased everything and had Djokovic down a break point in the seventh game before losing the opening set when he netted a forehand in the only service break.

Djokovic settled into the groove and broke Stepanek's serve a second time in the eighth game of the second set, when the Czech was stranded at the net and the top seed volleyed past him.

Djokovic served it out for the set and Stepanek needed a 17-minute opening game in the final set before holding service, as the world number one stepped up the pressure.

The defending champion fought off a break point in the eighth game but got the winning break three games later, and served out for victory.

"I have respect for him because he's a fighter, he's a competitor, and somebody that is one of the rare players who comes to the net nowadays and mixes up his style of the game," said Djokovic, whose 37 winners to 19 unforced efforts ratio underlined his form.

Comments
Topics mentioned in this article
Australian Open 2013 Wimbledon 2012 Tennis Radek Stepanek Novak Djokovic
Get the latest updates on ICC T20 Worldcup 2022 and CWG 2022 check out the Schedule, Live Score and Medals Tally. Like us on Facebook or follow us on Twitter for more sports updates. You can also download the NDTV Cricket app for Android or iOS.