Having waited 76 years for a men's Grand Slam champion and 24 years to celebrate a women's tour winner, Britain, once the cash-heavy, running joke of world tennis, is suddenly a serious player. 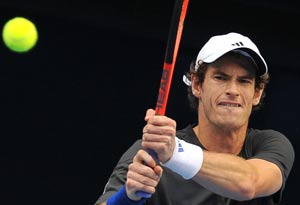 Having waited 76 years for a men's Grand Slam champion and 24 years to celebrate a women's tour winner, Britain, once the cash-heavy, running joke of world tennis, is suddenly a serious player.

Then, on Sunday, Heather Watson clinched the Japan Open, the first British winner of a women's tour title since Sara Gomer at Aptos in 1988.

Even world number one Victoria Azarenka was impressed.

Add Murray's London Olympic gold into the mix, Jonny Marray's men's doubles victory at Wimbledon and 18-year-old Laura Robson making the Guangzhou final last month -- the first such run by a British player since 1990 -- then it's hardly surprising that tennis is enjoying a mini-boom.

Figures released by the Lawn Tennis Association (LTA), the game's ruling body in the country, show that almost 100,000 under-18s play at an LTA-registered club -- an increase of 17 percent on last year.

"I know from speaking to Laura and Heather how passionate they are about getting more young girls into tennis," LTA chief executive Roger Draper told the Guardian.

"They play with a smile on their faces and that enjoyment also comes through in what they do off the court. When we want girls to see tennis as a fun, social sport, what better advert for that than them?"

Watson, a former US Open junior champion, has over 35,000 followers on Twitter while Robson, the 2008 Wimbledon girls winner, teamed-up with Canadian youngster Eugenie Bouchard to make a Gangnam dance video, even enlisting the help of Maria Sharapova along the way.

By Sunday, the video had notched up over a quarter of a million hits on YouTube.

Robson also enjoyed a fine run to the US Open fourth round this year, sending former world number one Kim Clijsters into retirement and defeating 2011 French Open winner Li Na along the way.

Now, both Watson and Robson are expected to be in the top 50 by the end of the year.

Watson, born in Guernsey but based at the same Bollettieri academy in Florida which nurtured Sharapova, said her title in Osaka was the reward for years of sweat and toil.

"I've worked so hard for this moment my whole career -- that's why I practised so hard, ran all those miles and lifted all those weights, for moments like this," she said.

"Britain has been breaking quite a few records recently, so I'm happy I could break another one. I'm proud to do this for my country."

Murray, the world number three, has long been Britain's standout performer, and 2012 has been a year to remember for the Scot.

He became the first Briton since Bunny Austin in 1938 to reach the Wimbledon men's final where his tearful defeat to Roger Federer was quickly forgotten with Olympic gold.

"British players? I have been asked about it many times when I got close to winning Grand Slams before," said Murray after his landmark US Open win.

"It's something that hasn't happened for a long time obviously in our country. And I'm proud that I managed to achieve it. I hope it inspires kids to play tennis and also takes away the notion that British players choke or don't win or it's not a good sport."

Murray insists there is a healthy future for the sport in Britain for both men and women players, pointing to Liam Broady's runner-up spot at the US Open juniors, a tournament that the Scot won himself in 2004.

"It's in a very good place in the UK right now. I hope it stays that way," said Murray.