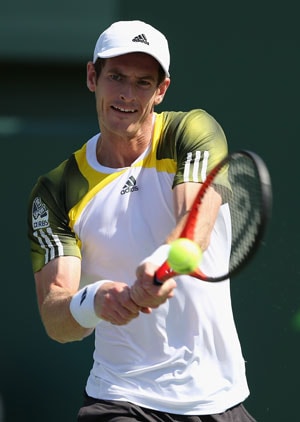 Britain's second-seeded Andy Murray, the reigning Olympic and US Open champion, advanced to the third round of the WTA and ATP Miami Masters by routing Australia's Bernard Tomic 6-3, 6-1, Saturday.

Tomic managed to win only 10 points in the final set of the 56-minute match.

World No. 2 Murray, who lost to top-ranked Novak Djokovic in last year's final, will face either Italy's Simone Bolelli or Bulgarian 29th seed Grigor Dimitrov in his next match.

Scotsman Murray hopes to claim his second Miami crown after lifting the 2009 trophy with a victory over Djokovic in the final.

Murray remained perfect against Tomic, the youngest player in the ATP top 100 at age 20, after having won their only prior meeting 6-3, 6-2 last year in a semi-final at Brisbane.

Murray broke in the fifth game and then held serve for a 4-2 lead, taking full advantage of 14 unforced errors in the first six games by Tomic.

Tomic netted a backhand to hand Murray a second break, and the first set, in the ninth game of the match.

The Aussie hit back-to-back double faults to surrender a break to Murray and fall behind 3-1 in the second set. Murray broke for the fourth time to seize a 5-1 lead and then held to take the match, closing it out with his eighth ace.

Radwanska will next face Sloane Stephens who advanced when Venus Williams withdrew with a back injury.

World No. 1 Serena Williams was set to face Japan's Ayumi Morita in another later match.

Tsonga defeated Serbia's Viktor Troicki 7-6 (8/6), 6-3 to reach the third round while Li smacked 19 winners and fought off a late comeback bid to defeat American Varvara Lepchenko 6-2, 6-4 and reach the fourth round.

Li had been sidelined for seven weeks after hurting her left ankle in the Australian Open final, which she lost to Victoria Azarenka, but she improved to 16-2 this season and booked a round-of-16 date with Spain's Garbine Muguruza, who upset Danish ninth seed Caroline Wozniacki 6-2, 6-4.

Li dominated the opening set, dropping only five points on her serve while Lepchenko managed only one winner against 10 unforced errors.

Li jumped ahead 4-2 in the second set before Lepchenko broke back and leveled at 4-4. Li broke again in the 10th game for the match, smashing a forehand winner to end matters.

Tsonga seized a 5-1 lead in the tie-breaker but the Serb scored the next five points to earn his second set point. Tsonga denied him with an ace and two points later, Troicki netted a drop volley to hand the Frenchman the first set.

Tsonga needed four break chances but finally took the opening game of the second set when Troicki netted a backhand.

Troicki went 0-for-5 on break chances in the second set, the last coming in the eighth game, as Tsonga held then broke again to claim the match and improve to 13-4 this year.

He will face either Finland's Jarkko Nieminen or Slovakian Martin Klizan in the next round.

US 17th seed Sam Querrey rallied to eliminate Poland's Lukasz Kubot 4-6, 6-3, 6-3 in one hour and 47 minutes. Querrey will next face either Canadian 14th seed Milos Raonic or Frenchman Guillaume Rufin.