Serbia's Ana Ivanovic savoured an increasingly rare taste of success on Wednesday as the former world number one moved into the Wimbledon second round with a 6-3, 3-6, 6-3 victory over Spain's Maria Jose Martinez Sanchez. 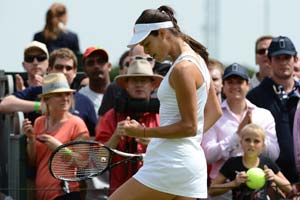 Serbia's Ana Ivanovic savoured an increasingly rare taste of success on Wednesday as the former world number one moved into the Wimbledon second round with a 6-3, 3-6, 6-3 victory over Spain's Maria Jose Martinez Sanchez.

Ivanovic was once regarded as the female game's brightest young star after winning the 2008 French Open just months after reaching the Australian Open final.

But the 24-year-old has been unable to fulfill her vast potential since then and has failed to get past the fourth round in her 16 Grand Slam appearances since that triumph in Paris.

She arrived at the All England Club with her ranking down to 14 and little expectation of emulating her 2007 run in the semi-finals.

This was a step in the right direction at least as her rain-delayed first round match was finally played to a conclusion on Court 14.

Ivanovic has rarely gone deep in any tournament this year and she had to survive plenty of nervous moments before seeing off the world number 51 to set up a second round tie against Ukraine's Kateryna Bondarenko.

The Serb broke in the second game of the opening set but promptly dropped her own serve.

After another exchange of breaks, Ivanovic was finally able to take control of an error-strewn set with one final break for a 5-3 lead.

Ivanovic dug deep to break back in the fifth game, but carelessly surrendered her serve again and this time the left hander made her pay by taking the set.

The final set was a tense affair with both players scratching around for the momentum that would carry them to victory.

It was Ivanovic who finally turned the match in her favour, breaking for a 4-2 lead and serving out the win.