India's Sania Mirza and her Russian partner Elena Vesnina are seeded fourth in the women's doubles of the Wimbledon, beginning June 20. 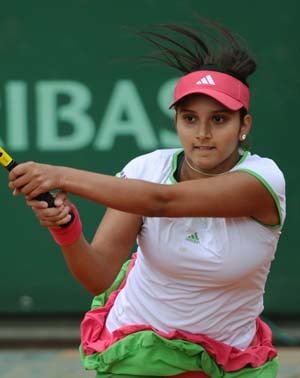 India's Sania Mirza and her Russian partner Elena Vesnina are seeded fourth in the women's doubles of the Wimbledon, beginning June 20.

Sania and Elena, who joined forces earlier this year, reached the final of the French Open this month.

Rohan Bopanna and Pakistan's Aisam-Ul-Haq Qureshi, who won their second ATP title together at Halle last week, have been given the fourth billing.

No Indian is seeded in the singles.

In the men's singles, World No.1 and defending champion Rafael Nadal heads the seeding, which is decided by the ATP Tour rankings and performance on grass courts. Serbia's Novak Djokovic, whose 41-match winning streak was ended by Swiss Roger Federer at Roland Garros in Paris, is the second seed.

Federer, a six times champion, has been seeded third.

The seeding order in women's singles follows the WTA ranking list. The only changes this year are Serena Williams and Venus Williams of the US moving to No.8 and No.24.

"It reflects the balance between their proven records and also their lack of competitive play in the past 12 months," said Wimbledon referee Andrew Jarrett.

The William sisters have made come-back from injury at Eastbourne this week. Venus was sidelined by hip and abdominal problems since the Australian Open in January, while defending champion Serena had not played since defeating Zvonareva to win her fourth Wimbledon title after suffering an off-court foot injury last July and then potentially life-threatening blood clots in each lung earlier this year.

The draw has Denmark's world number one Caroline Wozniacki as the top seed.

Comments
Topics mentioned in this article
Wimbledon 2011 Elena Vesnina Mahesh Bhupathi Leander Paes Sania Mirza Tennis
Get the latest updates on India vs Australia Series, check out the India vs Australia Schedule for 2020-21 and Ind vs Aus live score . Like us on Facebook or follow us on Twitter for more sports updates. You can also download the NDTV Cricket app for Android or iOS.