For Djokovic, he successfully reached his 17th consecutive Grand Slam quarter-final. He is third in the all-time table, with leader Roger Federer's streak of 36 coming to an end with his shock second round defeat. US great Jimmy Connors reached 27 straight quarter finals in the majors. 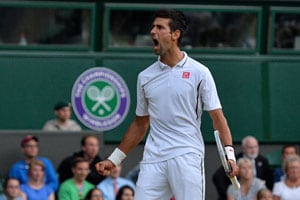 The Serbian top seed was tested by the German 13th seed in some extended rallies but ground his way through their fourth round encounter on Centre Court.

The 2011 Wimbledon champion is seeking a seventh Grand Slam title.

"Tommy is always a tough opponent. I had lost to him twice on grass before. He has great variety in his game and I always knew it would be a tough challenge," said Djokovic who dropped his serve for the first time in the tournament in Monday's encounter.

"It was never going to be easy. I had to work for my games but I served well and returned well. I am happy to have closed it out in straight sets."

Djokovic lost to Berdych at Wimbledon in 2010, but believes he is a much better grass court player now.

"I am playing really good tennis now, maybe even better than when I won the title in 2011."

Djokovic clinched the he first set when Haas, serving, blasted what should have been a smash at the net out of the court.

Haas broke in the second set for a 3-2 lead.

He then saved a third break point at 4-3 ahead, winning a 37-stroke rally, but Djokovic went on to break back with a winner, before pressing ahead to claim the set.

In the third set, the Serb broke for a 4-2 lead but the German was not giving up.

With Djokovic serving for the match, Haas managed to fashion a break point at the end of another lengthy rally, and took the game when Djokovic shot long.

Djokovic had match point on Haas's serve but the German staved it off for 5-5 and took it to a tie break.

After a succession of match points, Djokovic won the decider with a forehand winner.

Haas, meanwhile, was looking to become the oldest man to reach a Wimbledon quarter-final since Tom Okker of the Netherlands in 1979.

Though Djokovic went into the match with a 5-3 lead on Haas in their previous encounters, the German knocked him out of the 2009 Wimbledon quarter-finals.

However, the Serb got his revenge by knocking Haas out at the same stage at this year's French Open.

He is third in the all-time table, with leader Roger Federer's streak of 36 coming to an end with his shock second round defeat. US great Jimmy Connors reached 27 straight quarter finals in the majors.

The 26-year-old was the only former Wimbledon champion even to reach the third round.

Haas, a world number two in 2002, was competing in his 53rd Grand Slam. Only Federer and Lleyton Hewitt of active players, on 57, have taken part in more.