Federer, with his world ranking down to fifth for the first time in a decade, has won just one title this season - on the grass of Halle in June. 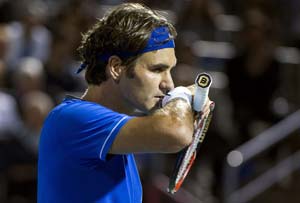 Roger Federer will seek to resurrect his disappointing season in front of expectant home fans as the 17-time Grand Slam winner returns to next week's claycourt Swiss Open for the first time in nine years.

Federer, 31, with his world ranking down to fifth for the first time in a decade, lost 7-6 (9/7), 7-6 (7/4) in the weekend semi-finals at Hamburg to Argentine qualifier Federico Delbonis as the slumping Swiss struggles to try and get adjusted to a new, larger racquet.

"I've been very close on numerous occasions to changing racquets in a bigger way," Federer was quoted as saying on the ATP website while in Germany.

"But then very often, time was the issue. Maybe also just the records of grand slams -- I was always keeping on playing quarters and semis -- so then it was also a bit more difficult to change it because of the time.

"After I lost at Wimbledon, I thought this is a good time to go and test the racquets, to take a bit of time off and then add some tournaments and see was there enough time to change or not," said the Swiss.

At his last appearance in the elite alpine community of Gstaad in 2004, Federer won the title a year after reaching the final against Jiri Novak on the back of a first career trophy at Wimbledon.

Federer, whose only title this season came on the grass of Halle in June, added the two summer clay events to his schedule after losing in a Wimbledon second-round surprise to Sergiy Stakhovsky, also into the field in the Swiss Alps.

Federer admits he is aiming to reclaim top form.

"I'm just still looking for the timing and the rhythm," he said in Hamburg.

"I tried everything I could (in Hamburg). It's been a difficult week throughout. But I'm happy I fought through many matches. It gives me the matches I was looking for.

"Unfortunately, I couldn't make it to the final, but nevertheless, I did have four good matches and these are the kind of matches I need."

In Gstaad, the top-seeded Federer will begin after a bye, facing the winner from a match between childhood friend Marco Chiudinelli and German Daniel Brands, whom he beat in three sets in his Hamburg opener.

Stanislas Wawrinka takes the second seeding as the Swiss plays in Gstaad for the 10th time, with a 2005 semi-final his best showing on the clay at 800 metres above sea level.