No regrets from Sharapova after French Open defeat

Sharapova started the match a clear underdog against a player who had run up a career-best 30 match win streak and who had been playing some of the finest tennis seen in the women's game in years. 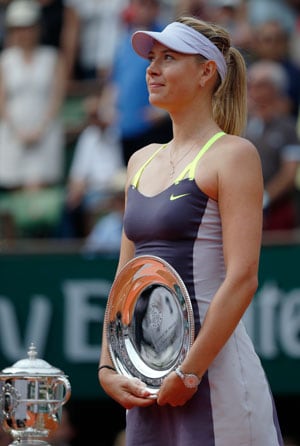 Her French Open title ripped away from her, a fourth defeat in a Grand Slam final and a 13th straight loss to Serena Williams, but Maria Sharapova says she will leave Paris with no regrets.

That was the Russian's mindset in the wake of her 6-4, 6-4 loss to the American in the final at Roland Garros on a day where she could have led 3-0 in the first set and battled her way back to 4-4 in the second, but in the end failed to grab her chances.

Dwelling on what had happened was not something she would entertain, Sharapova said.

"I don't have many regrets in life actually. I try not to have any at all," she said..

"You have to move forward. And it doesn't matter how many times I have lost to a player or what situation I was in, whether I was up or down, how it ended or how it finished.

"You move on. Of course I thought I earned my position to be in the final. I did put up a fight obviously today against her. It was not enough.

"But she's been playing really great tennis. Certainly not an excuse, but she is playing extremely well."

Sharapova started the match a clear underdog against a player who had run up a career-best 30 match win streak and who had been playing some of the finest tennis seen in the women's game in years.

But after an early barrage from the American she was the first to nose ahead and had two break points on her own serve to lead 3-0 only to see the American win the next four games.

Then in the second set she looked down and out at 4-2 and break point against her but battled back to be level at 4-4 before Williams put the match away.

Asked where she had gone wrong, Sharapova agreed these had been key moments.

"I know I'm nitpicking here, but these are moments against her that I feel that I should be able to take, because then she has no pressure going in and serving and being up a break, you know, at 5-4, and serving harder than David Ferrer when he gets to the final of Roland Garros, you know, what I mean?"

"But I think getting to the Roland Garros final is not too shabby, so I'd say that's a positive."

Sharapova will now turn her attentions to the grasscourts of Wimbledon where she first made her Grand Slam breakthrough in 2004 as a 17-year-old, defeating the then dominant Serena Williams in straight sets.

Since then she has reached the semi-finals twice and lost the 2011 final to Petra Kvitova and she fancies her chances of doing well this year and perhaps winning a fifth Grand Slam title.

"I love all the tournaments that are coming up. I mean, especially Wimbledon," she said.

"It's not like I really need someone to give me motivation towards that, because when I get to the grass I always feel that I have motivation going into it."