Haas is enjoying a decent run of form this year having reached the quarter-finals at Roland Garros last month and won April's ATP tournament in Munich. 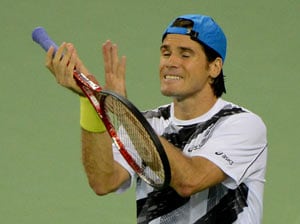 Former champion Michael Stich has said evergreen Tommy Haas is a realistic outside contender at Wimbledon next week as the 35-year-old German enjoys an Indian summer in his career.

"If he has a chance to win a Grand Slam, then it's at Wimbledon," the 44-year-old Stich, the last German to win the grass-court Grand Slam tournament in 1991, told website Spox.com with Wimbledon to start on Monday.

"The nice thing about Tommy is that he is healthy and enjoying it all at the moment.

"You have to assume there will be a setback at some point, but Tommy doesn't have to worry about that, thank god."

Haas is enjoying a decent run of form this year having reached the quarter-finals at Roland Garros last month and won April's ATP tournament in Munich.

After battling injury in recent years, the German has climbed back up to 11th in the rankings, having been world number two in 2002.

Haas' best performance at Wimbledon was when he lost to seven-time champion Roger Federer in the semi-finals at the All England Lawn Tennis and Croquet Club in 2009.

Stich says Federer is the favourite for this year's tournament.

"The journalists have written for the last five years that his time is now over, but he's always proved them wrong," said Stich, with Federer bidding for his 18th Grand Slam title at Wimbledon.

"If Roger is fit and motivated, then he can win again at Wimbledon, that is no question of that."