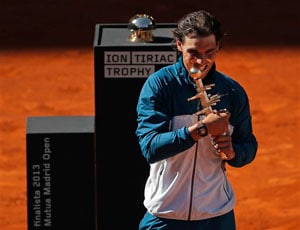 Rafael Nadal sealed his fifth title in seven tournaments since returning from a seven-month injury layoff as he claimed a third Madrid Masters title with a 6-2, 6-4 win over Stanislas Wawrinka on Sunday.

Nadal, who now holds a 9-0 career record over the Swiss, rolled through the first set thanks to two early breaks in little over half an hour.

And after a little more resistance from Wawrinka in the second, Nadal broke again to go ahead 4-3 before serving out to claim his 23rd Masters Series title.

Nadal now has 55 career titles with 40 coming on clay.

"The truth is that I am very happy and perhaps this victory is even more special where we have come from," he said afterwards.

"Last season was a difficult season and to play for me was a dream.

"This is the most aggressive I have been in a match.

"I think these have been intense matches in which I have been able to play well and thanks to this excellent crowd it has been easier."

The world number five started with intent as he broke Wawrinka in his opening service game and was then gifted a second break when the world number 15 double faulted at break point down in the third game.

Wawrinka then received treatment for a thigh injury as he struggled having come through demanding three-set matches against Grigor Dimitrov, Jo-Wilfred Tsonga and Tomas Berdych in the last three days.

And Nadal went onto serve out the first set with little difficulty 6-2.

Wawrinka did manage to keep the second set on serve early and even saved three break points to move 3-2 in front.

However, he still couldn't pressure the Nadal serve as the 11-time Grand Slam champion wasn't even forced to face a break point in the whole match, and in Wawrinka's next service game another double fault gave Nadal a 4-3 lead.

And much to the home crowd's delight, Nadal served it out to extend his remarkable record to 32-2 since returning from his tendinitis injury in February.