Tsonga will test the fragile knee which kept him off the courts for nearly three months from Wimbledon until September as he competes in a demanding fourth event in the last five weeks. 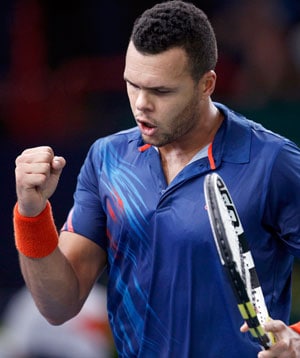 Jo-Wilfried Tsonga wasted little time in catching a flight out of Shanghai after losing a weekend semi-final to Novak Djokovic, insuring that he will make his start as top seed at this week's Austrian Open beginning Monday.

The Frenchman will test the fragile knee which kept him off the courts for nearly three months from Wimbledon until September as he competes in a demanding fourth event in the last five weeks.

"I missed the game, it was tough to see my friends playing," said the Frenchman of his enforced absence. "But it can be good because it makes your mind clear, you come back sometimes stronger. That's what I will try to do."

Tsonga won the title in 2011, his only previous appearance in the Austrian capital. Defending champion Juan Martin del Potro is not competing at this edition.

Haas is also playing after injury problems, with the 35-year-old German withdrawing in the Shanghai Masters last week with back pains prior to his third-round match with Del Potro.

The week will be crucial as the race to the eight-man season championships next month heats up with three weeks of qualifying play remaining.

Tsonga and Haas are both still in the mix with five places out of eight for the November 4 start of the wrapup in London still up for grabs.

Czech fifth seed Radek Stepanek and eight-seeded compatriot Lukas Rosol will use the Vienna week to tune up for their Davis Cup final with Serbia next month.

Sixth seed and 2008 finalist Gael Monfils, who beat Roger Federer in Shanghai before losing to Stanislas Wawrinka, returns to Austria for the first time since 2009.

Canadian Vasek Pospisil takes the seventh seeding and can use the week to prove he belongs in the upper reaches of the ATP after improving his ranking to 43rd in his breakthrough season. He will start against Vienna debutant Lleyton Hewitt.

Comments
Topics mentioned in this article
Tennis Samantha Stosur Roger Federer Tommy Haas Rafael Nadal Gael Monfils Novak Djokovic Wimbledon 2011
Get the latest updates on ICC T20 Worldcup 2022 and CWG 2022 check out the Schedule, Live Score and Medals Tally. Like us on Facebook or follow us on Twitter for more sports updates. You can also download the NDTV Cricket app for Android or iOS.