Tsonga, currently number eight in the ATP world rankings, suffered a left knee injury during Wimbledon that forced him to withdraw. 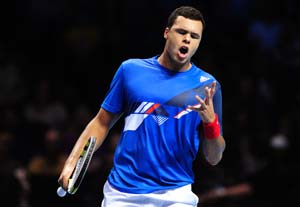 French number one Jo-Wilfried Tsonga, out injured since the second round of Wimbledon in June, will make his return to competition at the Moselle Open, one of the tournament's organisers said on Thursday.

Manager for the September 14-22 event Yvon Gerard told AFP that Tsonga had worked hard over the summer months to get back to full fitness but the only question was when he would play again.

"He's chosen to return indoors at Metz because the end of the season is played on this surface," he added.

"He has points to defend and the Masters in his sights. He's on top form."

Tsonga, currently number eight in the ATP world rankings, suffered a left knee injury during Wimbledon that forced him to withdraw.

He has won the tournament in northeast France twice, has been the event's ambassador for four years and will be the top seed.

World number 16 Gilles Simon, sidelined for two months because of whooping cough, was also scheduled to return and has been given a wild card entry.