Former top-ranked Ana Ivanovic made a stomping start to her Wimbledon buildup with a victory in less than 45 minutes in the Aegon Classic on Wednesday. 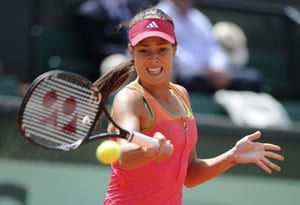 Former top-ranked Ana Ivanovic made a stomping start to her Wimbledon buildup with a victory in less than 45 minutes in the Aegon Classic on Wednesday.

Ivanovic launched winner after winner with her groundstrokes, tearing apart Anna Tatashvili's serve in a 6-1, 6-0 win over the young Georgian who's good enough to have gained a direct entry into Wimbledon.

Ivanovic was the tournament's highest remaining seed at No. 2, and the power of her best weapons suggested that despite any doubts instilled by seven months since her last title, she was the strong unofficial favorite for a first title on grass.

"I had forgotten how lovely the grass is. It's great to be back on it," she said.

"I lost the first game because I was feeling a bit passive, but when I stepped in a bit more it changed the match."

So encouraged was Ivanovic with the way she felt, that she even allowed her thoughts to consider Wimbledon ambitions. "I really would like one day to win that trophy," she said.

Ivanovic's excellence was all the more creditable given that rain caused a boring wait all day and she had left her book back in the hotel because it was too heavy to carry.

Given that it's a post-apocalyptic vampire fantasy, "The Passage" by Justin Cronin, perhaps Tatashvili should be thankful for small mercies.

Ivanovic next plays Rebecca Marino from Canada, and could have a semifinal with the resurgent Mirjana Lucic, a Wimbledon semifinalist at the age of 17 who last month reached her first WTA quarterfinals in 12 years.

The day was even more trying for Alison Riske, who had to endure five rain delays, which meant the American's 6-3, 6-4 win over Sarah Gronert of Germany took five and a half hours to complete.

Riske had both happy memories and an exciting prospect to sustain her. Last year, having given up the chance of a degree at Vanderbilt University, she played so well here in progressing through qualifying and into the semifinals that she was awarded a Wimbledon wild card. This year, having crept to the verge of the top 100, Riske has gained a Wimbledon place on merit.

Three more seeds went out - No. 6 Ekaterina Makarova of Russia, No. 9 Ayumi Morita of Japan, and No. 11 Yaroslava Shvedova of Kazakhstan - leaving only eight of 16.

No. 3-seeded Peng Shuai had to survive a scare. The Chinese player has just reached the world's top 20 for the first time but went a break of serve down in the final set before squeezing through 6-2, 6-7 (5), 7-6 (2) against British qualifier Naomi Broady.

Comments
Topics mentioned in this article
Tennis Ana Ivanovic Sabine Lisicki Maria Sharapova Daniela Hantuchova Anna Tatishvili Wimbledon 2011
Get the latest Cricket news, check out the India cricket schedule, Cricket live score . Like us on Facebook or follow us on Twitter for more sports updates. You can also download the NDTV Cricket app for Android or iOS.