Wimbledon champion Andy Murray was 'threatened' with an object which fans say was a mere tennis racquet. British police however is investigating the matter on suspicion that the object was a firearm. 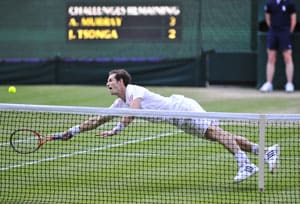 British police said on Friday they had arrested four men on suspicion of brandishing a gun at tennis star Andy Murray, although media reports suggest they were fans with nothing more threatening than a tennis racquet.

The suspects' car was stopped and searched and "no trace of a firearm was found", Scotland Yard said in a statement, adding that the men had been released on bail pending further investigation.

According to the Sun newspaper, the men tapped on the window of Murray's stationary car after a book-signing in London on Wednesday, trying to get him to sign a racquet.

The Wimbledon champion drove off so they got back in their Mercedes -- but not before a member of the public had called the police and reported that one of them had a weapon.

"Police were called at 17:00 (GMT) on Wednesday by a member of the public reporting that they had seen a male in a Mercedes car in Avenue Road (northwest London) in possession of a firearm," the police statement said.

"The car was subsequently stopped in Tadema Road (southwest London) and four men were arrested on suspicion of being in possession of a firearm.

"They were taken into custody and on Thursday bailed to return on a date in late January, pending further investigation.

"A search of the car was conducted and no trace of a firearm was found. Enquiries continue."

In July, Murray became the first British man to win Wimbledon for 77 years, although he missed the latter part of the season after undergoing surgery on his back in September.

Comments
Topics mentioned in this article
Tennis Andy Murray Wimbledon 2011
Get the latest updates on Olympics 2020, Olympics 2020 Medal Tally, Live Cricket Score . Like us on Facebook or follow us on Twitter for more sports updates. You can also download the NDTV Cricket app for Android or iOS.