Roger Federer will warm up for this year's Wimbledon by playing at Germany's Halle ATP tournament from June 7 until June 12, it was announced on Thursday. 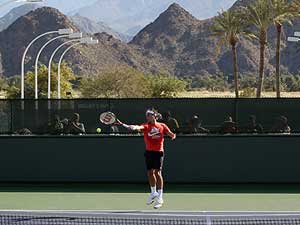 The 29-year-old Swiss star, who has won a record 16 Grand Slam titles including six Wimbledon crowns, traditionally plays at Halle's event to prepare for the fortnight-long championships at SW19.

With a world ranking of second in the world, Federer is the top player to sign up so far for Halle with fellow top-ten players Tomas Berdych, of the Czech Republic, and Sweden's Robin Soderling, also due to attend.

Comments
Topics mentioned in this article
Tennis David Ferrer Novak Djokovic Bernard Tomic Rafael Nadal Andy Murray Stanislas Wawrinka Roger Federer Wimbledon 2011
Get the latest updates on ICC T20 Worldcup 2022 and CWG 2022 check out the Schedule, Live Score and Medals Tally. Like us on Facebook or follow us on Twitter for more sports updates. You can also download the NDTV Cricket app for Android or iOS.