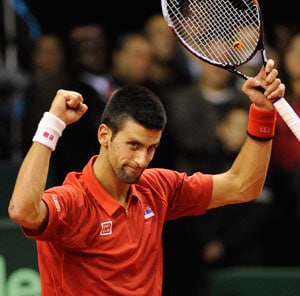 Lukas Rosol gave defending champions the Czech Republic a commanding 2-0 lead in their Davis Cup quarter-final clash with hosts Kazakhstan on Friday, battling back from a set down to beat Andrey Golubev.

Jan Hajek had gained the first point of the best-of-five match tie for the Czechs when he beat Mikhail Kukushkin 6-3, 6-2, 6-4.

Now Radek Stepanek, back from neck surgery in the wake of the Australian Open in January, will have the chance to clinch victory in Saturday's doubles when he teams up with Hajek against Evgeny Korolev and Yuriy Schukin.

It's a strong position for a Czech team that suffered a severe blow with the injury withdrawal of world No. 6 Tomas Berdych prior to the tie on an indoor clay court in Almaty.

"I am very happy, because 2-0 after the first day for a captain is very important," said Czech skipper Jaroslav Navratil. "Radek wants to play tomorrow to finish our tie, so I hope that they can finish it."

The winners of the tie will face Argentina or France in the semi-finals of the nations tournament.

Argentina and France ended the opening day in Buenos Aires knotted at 1-1. Juan Monaco, ranked 19th in the world, cruised past 13th-ranked Gilles Simon 7-6 (7/2), 6-2, 6-4 on the clay courts at Parque Roca to even the tie after Jo-Wilfried Tsonga gained the first point for France.

Tsonga was a heavy favorite against 71st-ranked Berlocq, but the Argentinian was buoyed by the home crowd of about 4,500.

Berlocq, 30, was firing on all cylinders from the baseline, and caught Tsonga off-guard with a string of drop shots en route to winning the first set.

Tsonga, however, appeared on his way after taking the second and third sets, but Berlocq rallied from a break down to take the fourth before Tsonga reasserted himself in the fifth.

Djokovic recovered from an early break in the opening set and took control from there.

He saved the only break point he faced in the third set and broke Isner at love for a 6-5 advantage.

He served out the match with a love game, wrapping it up in two hours with a backhand winner that sent him dancing over to celebrate with his teammates.

Tasked with getting the tie back on terms, Querrey started strong, winning the first set and going up an early break in the second.

It was just the second five-set match victory of Querrey's career, and he finished it in style, breaking for a 5-4 lead in the fifth set and serving it out with a love game.

The winners in Boise will take on either Canada or Italy, who were 1-1 after the first day of play in Vancouver.

After going up a break in the third set he fended off a break point in the 10th game, holding to take the set.

From there, Seppi was in control against the 22-year-old Pospisil, whose 46 unforced errors proved too much to overcome despite the fierce support of a partisan crowd.