India's Mahesh Bhupathi and Elena Vesnina of Russia lost to Jurgen Melzer of Austria and Iveta Benesova of the Czech Republic 6-3, 6-2 in the Wimbledon mixed doubles final on Sunday. 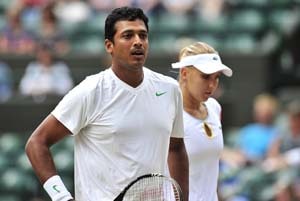 India's Mahesh Bhupathi and Elena Vesnina of Russia lost to Jurgen Melzer of Austria and Iveta Benesova of the Czech Republic 6-3, 6-2 in the Wimbledon mixed doubles final on Sunday.

Vesnina dropped her serve thrice and that was enough for Melzer and Benesova, seeded ninth, to wrap up the match in less than an hour.

Bhupathi was aiming for his eighth Grand Slam mixed doubles title. He has won with seven different partners. The Indian has won two mixed doubles titles here with Elena Likhovtseva of Russia in 2002 and Mary Pierce of France in 2005.

The Austrian-Czech pair have been in hot form in the tournament and did not lose a single set on their way to the title.

Melzer and Benesova carried on in the same vein against the fourth seeds. They broke Vesnina in the fourth game to go 3-1 up and then held their serve tightly to win the first set.

Vesnina was broken in the third game of the second set with Melzer making some solid returns.

The Indo-Russian pair applied pressure on Benesova's serve in the fourth game but the Czech player came up with an ace at 30-30 and held it for a 3-1 lead.

The Russian's serve was again on target and she was broken in the seventh game. Benesova then served out the match.

Comments
Topics mentioned in this article
Wimbledon 2011 AFC Wimbledon Elena Vesnina Jurgen Melzer Sania Mirza Mahesh Bhupathi Iveta Benesova Tennis
Get the latest updates on IPL 2020, check out the IPL Schedule for 2020 and Indian Premier League (IPL) Cricket live score . Like us on Facebook or follow us on Twitter for more sports updates. You can also download the NDTV Cricket app for Android or iOS.