Three-time Wimbledon runner-up Andy Roddick moved into the third round on Wednesday by beating Victor Hanescu 6-4, 6-3, 6-4. 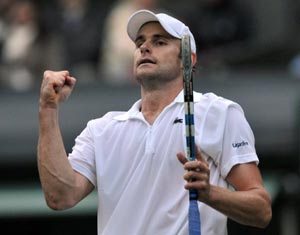 Three-time Wimbledon runner-up Andy Roddick moved into the third round on Wednesday by beating Victor Hanescu 6-4, 6-3, 6-4.

Roddick reached the Wimbledon final in 2004, '05 and '09, losing to Roger Federer all three times.

On Wednesday, Roddick was leading 2-1 in the second set when Hanescu fell to the turf on Centre Court and then called for a trainer to examine his right hand.

The Romanian continued, but Roddick finished the match with 15 aces and committed only six unforced errors.

Comments
Topics mentioned in this article
Tennis Victor Hanescu Andy Roddick Wimbledon 2011
Get the latest Cricket news, check out the India cricket schedule, Cricket live score . Like us on Facebook or follow us on Twitter for more sports updates. You can also download the NDTV Cricket app for Android or iOS.