Radwanska, who makes no secret of her strong Catholic faith, was photographed in the "Body Issue" of ESPN Magazine in profile without a stitch, sitting in a lawn chair by a pool filled with tennis balls. 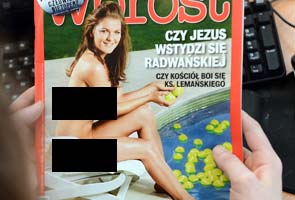 Polish tennis star Agnieszka Radwanska on Friday defended her controversial nude photo-shoot which saw her dropped by a Catholic youth movement, claiming the pictures were in good taste.

Radwanska, 24, who makes no secret of her strong Catholic faith, was photographed in the "Body Issue" of ESPN Magazine in profile without a stitch, sitting in a lawn chair by a pool filled with tennis balls.

While not explicit, the nude proved too much for a Catholic group known as Krucjata Mlodych (Youth Crusade), which runs a campaign dubbed "I'm not ashamed of Jesus".

The young Catholics, who claim more than a million followers, dropped Radwanska last week for what they said was "immoral behaviour" in the ESPN spread.

But world number four Radwanska insisted the pictures were a celebration of the "beauty of the bodies of the best athletes in the world".

"My tennis colleagues Serena Williams, Daniela Hantuchova and Vera Zvonareva have all participated in the past," Radwanska wrote on a statement published on her Facebook page.

"The pictures are certainly not meant to cause offense and to brand them as immoral clearly does not take into account the context of the magazine.

"Moreover, they do not contain any explicit imagery whatsoever. I train extremely hard to keep my body in shape and that's what the article and the magazine is all about.

"It has been suggested by some members of the press (among others) that I was paid for the photo shoot. This is absolutely not the case. Neither I nor any of the other athletes were paid.

"I agreed to participate to help encourage young people, and especially girls, to exercise, stay in shape and be healthy."

This year's beaten Wimbledon semi-finalist previously appeared in a television commercial sponsored by the group in which she spelled out the word "Jesus" with tennis balls and urged young Poles not to be ashamed of their faith.

Other athletes in the buff in the special issue include Puerto Rican motocross champ Tarah Gieger and nine-time major golf champion Gary Player, the oldest model at 77.

Home to the former pope, John Paul II, Poland remains one of Europe's most devout nations. More than 90 percent of the population declares itself Roman Catholic.

Comments
Topics mentioned in this article
Tennis Maria Sharapova Aisam-Ul-Haq Qureshi Leander Paes Lukas Dlouhy Vera Zvonareva Daniela Hantuchova Agnieszka Radwanska Andy Roddick Rohan Bopanna Wimbledon 2011
Get the latest updates on India vs Australia Series, check out the India vs Australia Schedule for 2020-21 and Ind vs Aus live score . Like us on Facebook or follow us on Twitter for more sports updates. You can also download the NDTV Cricket app for Android or iOS.