15th seed Jankovic bows out in first round

Former No. 1 Jelena Jankovic has been eliminated in the first round at Wimbledon, losing to Maria Jose Martinez Sanchez of Spain 5-7, 6-4, 6-3. 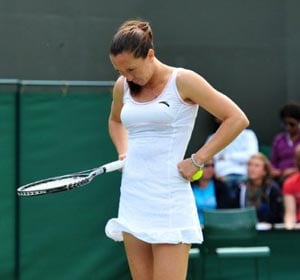 Former No. 1 Jelena Jankovic has been eliminated in the first round at Wimbledon, losing to Maria Jose Martinez Sanchez of Spain 5-7, 6-4, 6-3.

The 15th-seeded Serb reached the fourth round at the All England Club last year. Her loss on Tuesday was the first in the opening round of a Grand Slam tournament since 2005.

Jankovic lost in the final of the 2008 U.S. Open and has also reached the semifinals at the French and Australian Opens. Her best showing at Wimbledon is making the fourth round, which she has done four times.

Comments
Topics mentioned in this article
Tennis Jelena Jankovic Maria Jose Martinez Sanchez Wimbledon 2011
Get the latest Cricket news, check out the India cricket schedule, Cricket live score . Like us on Facebook or follow us on Twitter for more sports updates. You can also download the NDTV Cricket app for Android or iOS.