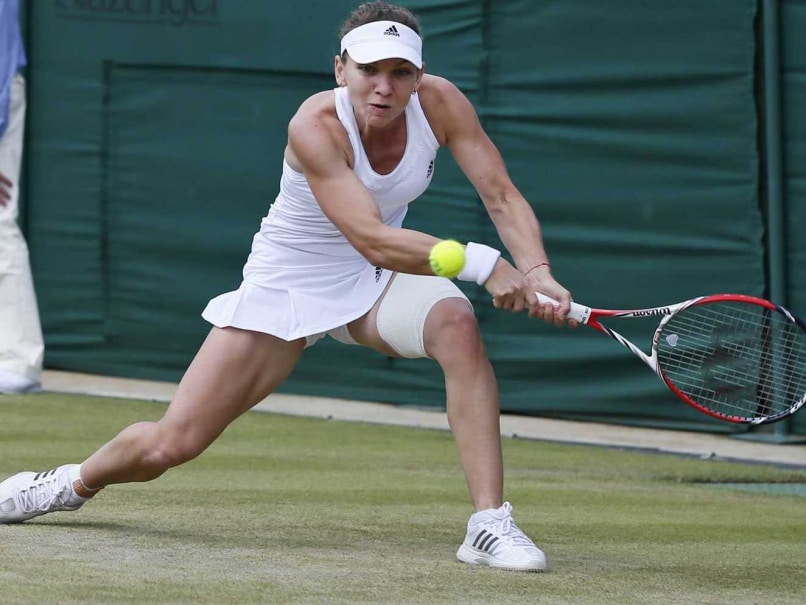 Simona Halep plays a shot during her 4th round match in Wimbledon 2014© AP
London:

Simona Halep booked her first Wimbledon quarter-final appearance as the Romanian third seed eased to a 6-3, 6-0 victory against Kazakhstan's Zarina Diyas, while former finalist Sabine Lisicki also made the last eight after surviving an injury scare on Tuesday.

Halep had never been beyond the second round in her three visits to the All England Club, but the 22-year-old has been in fine form this year, reaching the French Open final last month, and she demolished world number 72 Diyas in just 57 minutes in a fourth round tie delayed from Monday due to bad weather.

The world number three, the highest seed left in the women's draw, is only the second Romanian woman, after Virginia Ruzici, who is now her manager, in 1978 and 1981, to make it to the last eight at Wimbledon.

After world number one Serena Williams' stunning defeat against Alize Cornet and the surprise exits of Li Na and Agnieszka Radwanska, Halep is the highest seed left in the women's tournament.

Halep, the world number three, arrived on court with her left leg heavily strapped, but it didn't appear to hinder her as she broke early in the first set and then cruised through the second in dominant style.

Her quarter-final opponent will be Lisicki, last year's runner-up, after the German 19th seed defeated Kazakhstan's Yaroslava Shvedova 6-3, 3-6, 6-4 in another weather-delayed tie.

Lisicki, who broke down in tears during her loss to Marion Bartoli in the final 12 months ago, shrugged off a shoulder injury to defeat world number 65 Shvedova in just under two hours on Court Three.

She has now reached the quarter-finals in her last five Wimbledon outings.

Shvedova did have grasscourt pedigree after winning only the fourth 'Golden Set' in the history of tennis at Wimbledon in 2012 when she took all 24 points of the opening set against Sara Errani.

And the 26-year-old, who also won the Wimbledon women's doubles title with Vania King in 2010, seemed to have a chance of a shock win when Lisicki called for the trainer to check on her right shoulder at break point down at 1-1 in the final set.

But Lisicki, dubbed 'Doris Becker' because her big-serving style is reminiscent of compatriot and former Wimbledon champion Boris Becker, comes alive at the All England Club.

The 24-year-old has never gone past the last 16 at any of the other three Grand Slams, but once again she saved her best for grass and ignored her injury problems to take the deciding set.

Tournament officials had decided there was a strong chance of fifth seed Sharapova's match, which had been scheduled as the third to be played on Court One, not finishing before nightfall on Monday.

Centre Court will therefore stage the delayed contest, with the winner facing a showdown with rising Canadian star Eugenie Bouchard in the quarter-finals on Wednesday.

The semi-final line-up in the bottom half of the draw should be completed on Tuesday, with the 2011 Wimbledon champion Petra Kvitova taking on fellow Czech Barbora Zahlavova Strycova, and their compatriot Lucie Safarova, the 23rd seed, facing Russian 22nd seed Ekaterina Makarova.

Zahlavova Strycova followed up her surprise win against Chinese second seed Li Na by reaching her maiden grand slam quarter-final with a 6-2 7-5 victory over Caroline Wozniacki.

Makarova enjoyed the most eye-catching win on Monday, bustling to a 6-3 6-0 victory over Polish fourth seed Radwanska.

Comments
Topics mentioned in this article
Wimbledon 2014 Simona Halep Tennis
Get the latest updates on ICC Women's Cricket World Cup 2022 and IPL 2022, check out the Schedule , Live Score and IPL Points Table. Like us on Facebook or follow us on Twitter for more sports updates. You can also download the NDTV Cricket app for Android or iOS.