Leander Paes and Radek Stepanek progressed to the third round with win over Mexican-American pair Santiago Gonzalez and Scott Lipsky, while Sania Mirza and Cara Black lost to Russian-Czech pair of Anastasia Pavlyuchenkova and Lucie Safarova. 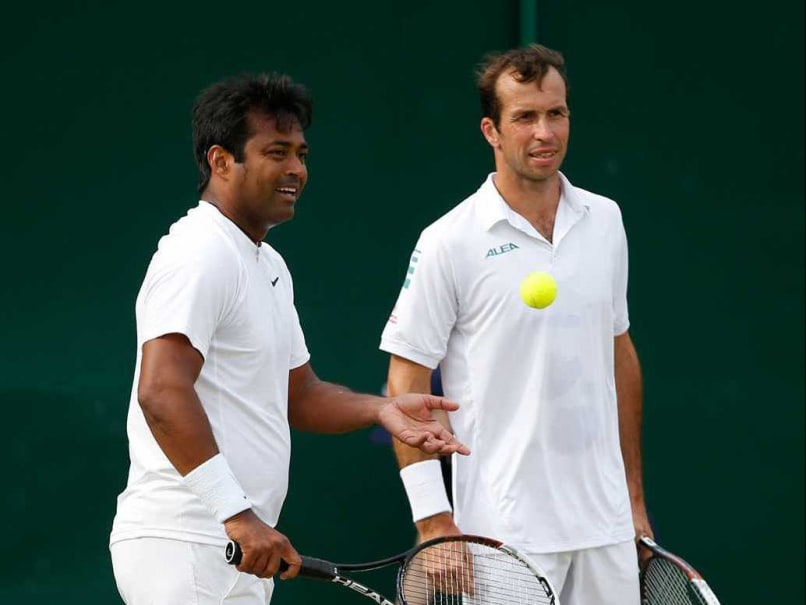 Paes-Stepanek next play the winners of the match between Feliciano Lopez and Jurgen Melzer and 11th seeds Jean-Julien Rojer and Horia Tecau.© AP
London:

While Indian tennis player Leander Paes progressed to the third round of men's doubles, compatriot Sania Mirza lost out in the women's doubles second round on a rain affected Day 6 of the All England Tennis Championship at Wimbledon here.

After sharing the first four sets, both teams successfully defended their service games until at the very end the fifth seeds broke Gonzalez and Lipsky on their fifth break point of the set, which lasted an hour and 15 minutes.

Paes-Stepanek next play the winners of the match between Feliciano Lopez and Jurgen Melzer and 11th seeds Jean-Julien Rojer and Horia Tecau. (Also read: Serena Williams knocked out)

On the adjacent Court No.11, Indo-Zimbabwean fourth seeds Sania and Cara Black were defeated 6-2, 6-7(7), 4-6 by Russian-Czech combine of Anastasia Pavlyuchenkova and Lucie Safarova in two hours and 26 minutes.

Sania and Cara were well on their way to clinching the match after easily winning the first set in 26 minutes. The fourth seeds were leading the second set tie-breaker, but Anastasia and Lucie turned the tables by winning the set and pushing the match into the decider.

In the third set, the unseeded pair decisively broke Sania and Cara twice to enter the third round. (Read: Sharapova cruises)

Rohan Bopanna's both men's and mixed doubles matches were cancelled and postponed due to inclement weather.

Sunday is a rest day and action begins Monday at the only grass court Major tournament in the Tennis circuit.

Comments
Topics mentioned in this article
Leander Paes Radek Stepanek Sania Mirza Cara Black Wimbledon 2014 Tennis
Get the latest updates on India vs England Series, India vs England , live score and IPL 2021 Auction . Like us on Facebook or follow us on Twitter for more sports updates. You can also download the NDTV Cricket app for Android or iOS.