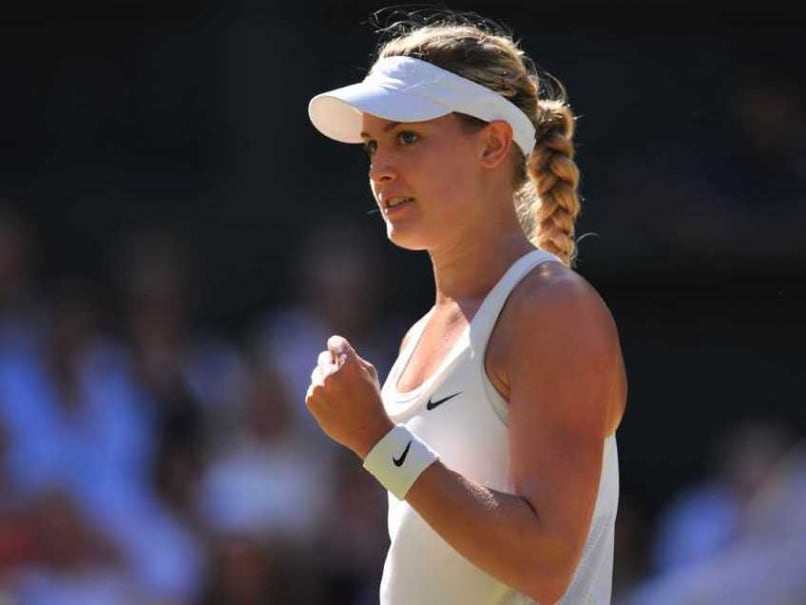 Eugenie Bouchard insists she will only be satisfied with her meteoric rise if she is crowned queen of Wimbledon in Saturday's final against former champion Petra Kvitova. (Bouchard: Soft on Teddy Bears, Tough on Opponents)

Those regal connections have earned Bouchard plenty of intrigued enquires from the British media throughout her march to a first Grand Slam final and the 13th seed would dearly love a royal audience with the Duchess of Kent, who presents the Venus Rosewater dish awarded to the women's singles champion at the All England Club. (Bouchard vs Kvitova in Final)

And if she does lift the trophy, the ice-cool Bouchard may finally let her emotions pour out.

After falling at the semifinal stage of both the Australian and French Opens this year, Bouchard could have been forgiven for embarking on a jubilant celebration following her 7-6 (7/5), 6-2 victory over world number three Simona Halep in Thursday's last four clash on Centre Court.

But like the royals idolised by her mother, Bouchard carries herself with a serene disposition and when she finally clinched victory on her sixth match point, she only briefly raised her arms and gave a small fist pump.

Bouchard, the junior Wimbledon champion only two years ago, holds herself to high standards and becoming the first Canadian to reach a Grand Slam final is nothing more than she expected, so she will save any real celebrations for if she wins the title this weekend.

"I'm waiting for a big moment to go nuts," Bouchard said. "Of course, achieving a lifelong dream like winning a slam is very exciting to me. But I feel like my job is not done here.

"There's no need for a huge celebration because I'm still working. I still have another match.

"But it's not a surprise to me. I expect good results like this. So for me, I was like, 'Okay, good'. It's a step in the right direction."

Bouchard's breakthrough performance has recalled memories of Maria Sharapova, who rocked the tennis world by defeating Serena Williams in the Wimbledon final aged just 17 in 2004.

A decade later, the effervescent blonde seems set to inherit Sharapova's mantle as the most marketable player of her generation.

Bouchard is happy to accept flattering comparisons with the five-time Grand Slam champion, but would prefer to be seen as more than a clone of the glamourous Russian.

"I see it as a compliment to be compared to someone like Sharapova who has won five slams," Bouchard said.

"She's a great champion so I see it in a positive light. "But I'm also my own person, I don't want to be the next someone else. I want to be the first of me.

"I want to be my own individual person. I'll try to make my own history."

Standing in Bouchard's way is the formidable figure of sixth seed Kvitova, who is back to her best after a barren period and dismissed her close friend and compatriot Lucie Safarova 7-6 (8/6), 6-1 in the semifinals.

The 24-year-old struggled to cope with the burden of expectation after winning her maiden Grand Slam title at Wimbledon in 2011.

Unable to make it back to a Grand Slam final until now, Kvitova credits sports psychologist Michal Safar for helping her come to terms with her champion status.

"When I won here in 2011 I needed to change myself both on and off the court a little bit," Kvitova said.

"I had to get used to the pressure. I won here quite young, and it was difficult for me to handle it.

"I'm still working on the mental side, that's something I really need. "With my sports psychologist, it's nice to talk with someone who knows how I'm feeling before my match."

Comments
Topics mentioned in this article
Wimbledon 2014 Eugenie Bouchard Tennis
Get the latest updates on ICC T20 Worldcup 2022, check out the Schedule and Live Score. Like us on Facebook or follow us on Twitter for more sports updates. You can also download the NDTV Cricket app for Android or iOS.