Defending Wimbledon champion Andy Murray crashed out after losing to 11th-seeded Grigor Dimitrov of Bulgaria in straight sets in the quarterfinals. 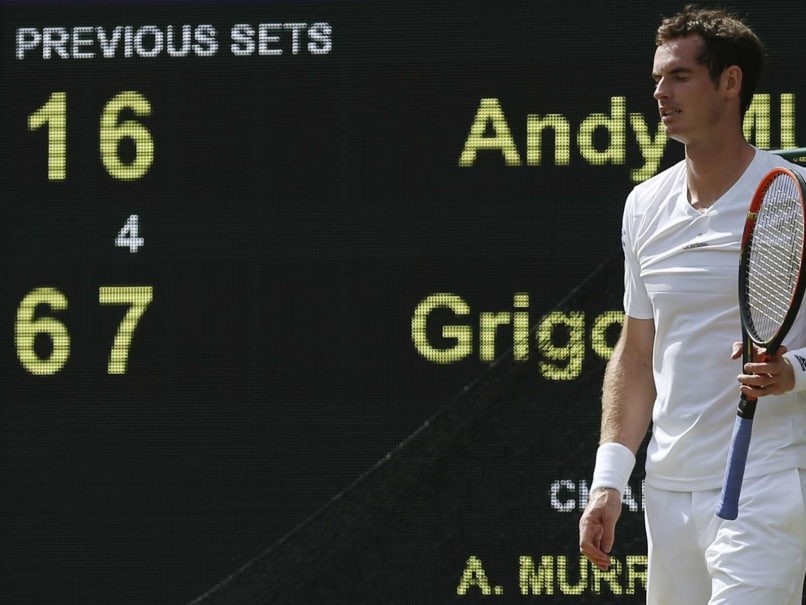 A day after Nadal's shock exit, Murray crashed out in the quarterfinals.© AP
London:

Andy Murray's reign as Wimbledon champion came to a stunning end as Bulgaria's Grigor Dimitrov clinched a sensational 6-1, 7-6 (7/4), 6-2 victory in the quarterfinals on Wednesday.

Murray had hoped to become the first British man to successfully defend the Wimbledon title since Fred Perry in 1936, but the Scot was completely out-classed in a two-hour masterclass from 11th seed Dimitrov on Centre Court.

The 27-year-old's unexpected exit snapped his 17-match winning streak at the All England Club, a magical sequence which had brought him Olympic gold and a first Wimbledon title, and also ended his hopes of reaching a sixth consecutive semifinal at the grasscourt Grand Slam.

Dimitrov, 23, will play top seed Novak Djokovic or Croatia's Marin Cilic on Friday for a place in the final. (Read also: Nick Kyrgios Topples No. 1 Rafael Nadal at Wimbledon)

"I am excited and happy to win through in straight sets. It's never easy against Andy in front of his home crowd but today I was fortunate," 11th-seeded Dimitrov said.

"I sensed in the warm up that his game was not at the highest level but I was already confident I could play at a high level and play good tennis.

"The first set I had good rhythm and held my ground in the tie-break which was crucial and the third set I had it under control."

Only once before had Murray lost a Wimbledon quarterfinal -- against Rafael Nadal in 2008 -- and this was his first defeat against a player ranked outside the top 10 at a Grand Slam since 2010.

After years of struggling to live up to the vast potential that has earned him numerous comparisons with Roger Federer, this was a thrilling performance from 23-year-old Dimitrov, who finally secured his first win over a top-10 player at a Grand Slam at the fifth attempt. 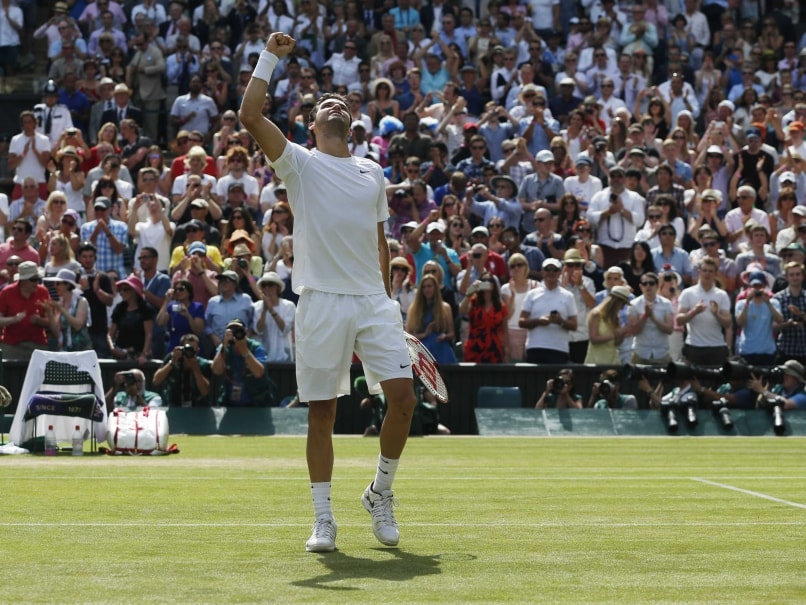 Dimitrov celebrates after his sensational victory.

The world number 13 was playing in his first All England Club quarterfinal, but he is a former junior Wimbledon champion and had underlined his grasscourt pedigree by winning the Queen's Club title last month.

He showed no signs of being overawed and secured two break points in the fourth game, converting at the first attempt when he pinned Murray to the baseline then rushed the net to force the Scot to blaze his backhand wide.

By the time Dimitrov broke again for a 5-1 lead a stunned silence had descended on Centre Court and he finished off the set in just 25 minutes.

The shock of dropping a set for the first time in this year's tournament only added to the already-lethargic Murray's malaise.

Murray seemed to have run out of answers when a tame backhand slice drifted out to give the Bulgarian a break for a 4-3 lead in the second set.

The third seed broke back to force a tie-break, but the crucial moment came at 4-4 in the breaker when Murray chose to charge the net behind a weak approach shot.

It was a disastrous gamble as Dimitrov stood his ground and unleashed a blistering backhand winner before serving out the set with a defiant roar.

Murray had been in equally dire straits when he defeated Fernando Verdasco from two sets down in the Wimbledon quarterfinals last year.

But he was unable to climbed off the canvas this time. Murray's game was riddled with mistakes -- he made 37 unforced errors in total -- and it was fitting that virtually his last act as champion was the double fault that gifted Dimitrov a 5-2 lead in the third set.

Dimitrov wasn't going to refuse that gift and he sealed his sensational triumph on his second match point.

Comments
Topics mentioned in this article
Andy Murray Wimbledon 2014 Tennis
Get the latest updates on ICC T20 Worldcup 2022, check out the Schedule and Live Score. Like us on Facebook or follow us on Twitter for more sports updates. You can also download the NDTV Cricket app for Android or iOS.