Wimbledon 2014: Rohan Bopanna-Aisam Qureshi Knocked Out in 2nd Round

Indo-Pak pair of Rohan Bopanna and Aisam Qureshi were dumped out by US-Canadian duo of Jack Sock and Vasek Pospisil in the second round. 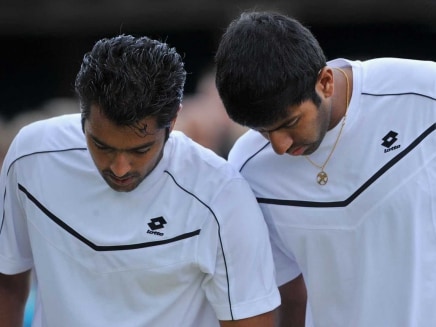 A file photo of Rohan Bopanna and Aisam-ul-Haq Qureshi.

Rohan Bopanna and his Pakistani partner Aisam-ul-haq Qureshi did all they could but still failed to get past the determined pair of Vasek Pospisil and Jack Sock in the rain-hit second round clash of the Wimbledon championships, in London on Tuesday.

The contest, spilling over to the second day, became lively after Bopanna and Qureshi won the fourth set to level the scores but ended up losing 7-6(3) 6-7(5) 3-6 6-4 5-7 against the unseeded Canadian-American combine in three hours and 13 minutes.

Now Leander Paes is the only Indian left in the men's doubles event of the grass court Grand Slam. Divij Sharan and Purav Raja had fell in the first round with their respective partners.

For Bopanna and Qureshi it was their second consecutive second-round exit at Grand Slam level. At French Open also they had crashed out at this stage while at Australian Open they made the third round

Comments
Topics mentioned in this article
Wimbledon 2014 Rohan Bopanna Aisam-Ul-Haq Qureshi Tennis
Get the latest updates on ICC Women's Cricket World Cup 2022 and IPL 2022, check out the Schedule , Live Score and IPL Points Table. Like us on Facebook or follow us on Twitter for more sports updates. You can also download the NDTV Cricket app for Android or iOS.