Eugenie Bouchard has passed several hurdles to make it to the final of Wimbledon 2014. Her title clash against Petra Kvitova though will test her to the limits. 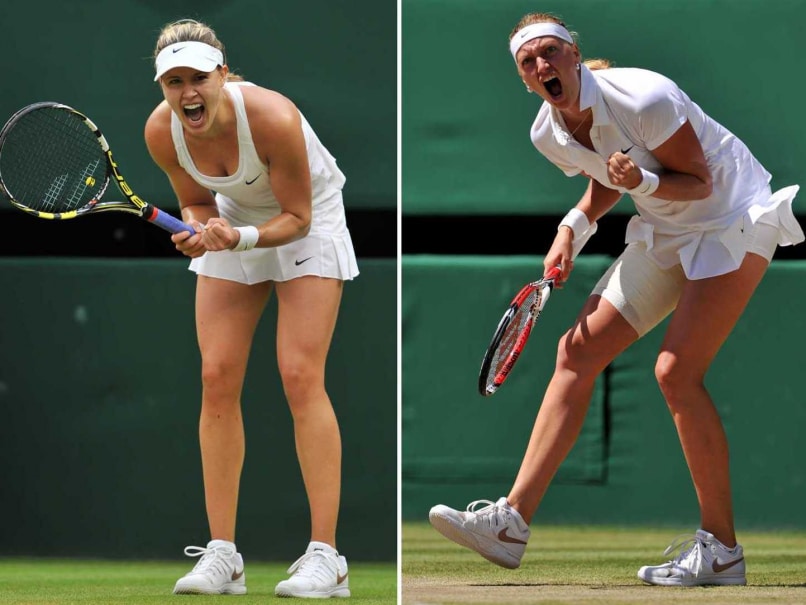 Petra Kvitova (R) may be a seasoned campaigner but Eugenie Bouchard has shown sheer talent can be a vital asset.© AFP
London:

Eugenie Bouchard will become an overnight phenomenon and multi-million dollar superstar if she defeats Petra Kvitova in Saturday's Wimbledon final.

Exactly 10 years to the day when 17-year-old Maria Sharapova blitzed Serena Williams on Centre Court, the same fate awaits the 20-year-old, the first Canadian in history to reach a Grand Slam singles final.

The comparisons between Bouchard and Sharapova are impossible to avoid. (Related: Princess Bouchard is soft on teddy bears but tough against rivals)

Both are tall, blonde and photogenic with the composed and self-confident high-profiles slavishly courted by blue-chip suitors desperate for endorsement.

But Bouchard refuses to get ahead of herself. (Also read: Bouchard brushes aside comparisons to Sharapova)

"First and foremost I focus on the tennis. Whatever comes with it, I take in my stride. I know it's part of the job and I appreciate everything that comes with it," said the Montreal native who will pocket more than $3 million if she triumphs on Saturday.

"But I know if I don't perform on the court then there's not much off court. So I really try to focus on my job, because at the end of the day I'm a tennis player.

"I go to work every day and I work on my tennis. As long as I do that, you know, I'll take anything that comes with it."

Those regal connections have earned Bouchard plenty of attention throughout her march to a first Grand Slam final and the 13th seed would dearly love a royal audience with the Duchess of Kent, who presents the Venus Rosewater dish awarded to the women's singles champion at the All England Club.

After falling at the semi-final stage of both the Australian and French Opens this year, Bouchard could have been forgiven for embarking on a jubilant celebration following her victory over world number three Simona Halep in Thursday's last four clash.

But like the royals idolised by her mother, Bouchard carries herself with a serene disposition and when she finally clinched victory on her sixth match point, she only briefly raised her arms and gave a small fist pump.

Bouchard, the junior Wimbledon champion only two years ago, holds herself to high standards and becoming the first Canadian to reach a Grand Slam final is nothing more than she expected, so she will save any real celebrations for if she wins the title this weekend.

"I'm proud of what I've accomplished, but the job is not over," she said.

"I started playing tennis at five years old and I was nine when I decided I wanted to do it professionally. Since that age I dreamt of winning a Grand Slam.

"It's been a long time in the making, for it to finally come together, all the hard work, the talent I know I have, the effort I put in, for it to produce results on the match court.

"It's not just an overnight thing. I've been believing in myself more and more."

Another thing Bouchard appears to have in common with Sharapova is her decision not to engage much with her fellow players.

While Bouchard admits to falling out with British star Laura Robson recently, 2011 champion Kvitova is a more popular figure among her peers.

And the Czech's rather cold comments about the Canadian hinted at an undercurrent of tension between the finalists.

"I have many friends on the tour. Of course I think it is possible," said Kvitova, who has dropped just one set en route to the final.

"I'm glad that I have a friends here. I don't know her (Bouchard). I just know how she's playing, and that's it. We are not really talking to each other."

Comments
Topics mentioned in this article
Eugenie Bouchard Petra Kvitova Wimbledon 2014 Tennis
Get the latest updates on ICC Women's Cricket World Cup 2022 and IPL 2022, check out the Schedule , Live Score and IPL Points Table. Like us on Facebook or follow us on Twitter for more sports updates. You can also download the NDTV Cricket app for Android or iOS.