Nick Kyrgios, a 19-year-old wild-card entrant from Australia, knocked out World No.1 Rafael Nadal on Tuesday in the fourth round of Wimbledon. 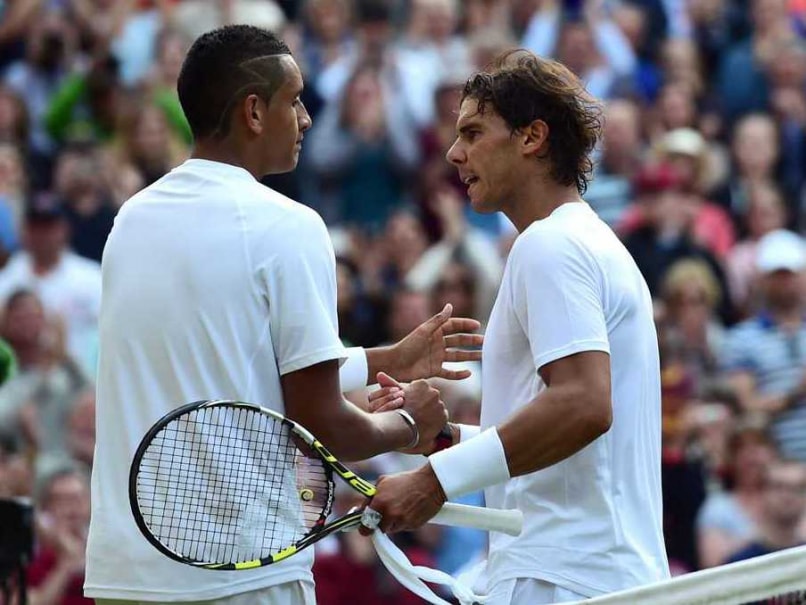 Until the evening shadows fell on Centre Court Tuesday, the last time a teenager beat a No. 1 player at a Grand Slam event was at the 2005 French Open. The winner was Rafael Nadal, over Roger Federer, a couple of days after Nadal's 19th birthday.

Nick Kyrgios, a 19-year-old wild-card entrant from Australia, joined Nadal in that club Tuesday by beating him in the fourth round of Wimbledon. (Also read: Nick Kyrgios inspired to beat Nadal by mother's barb)

All limbs and panache, Kyrgios battered Nadal with big serves, boundless reach and boyish enthusiasm. Ranked No. 144 in the world, but rising fast, Kyrgios looked immune to the pressure. Rather than succumb to Nadal's stonewall defense, as most opponents eventually do, he relentlessly attacked it, building strength and confidence on the way to a 7-6 (5), 5-7, 7-6 (5), 6-3 victory.

He served quickly to unsettle Nadal, seeded second in the tournament, and hasten his notoriously slow pace of play. He unleashed first serves reaching 133 mph, and second serves nearly as fast. He struck right-handed forehands with the loose motion of a man cracking a whip. He nonchalantly sent one Nadal shot back between his legs, raising his arms when it won the point.

"I had to play a solid game that gave me the best shot," Kyrgios said afterward. "That's serving big and playing aggressive."

Kyrgios won the final point with his 37th ace. He turned to friends and family, did a bit of a dance, something he later called the "juicy wiggle." He quickly assumed an expression that said he was not surprised. His mother back at home might have been, however.

"Last night I was actually reading a comment that she thought Rafa was too good for me," Kyrgios said. "It actually made me a bit angry."

He had not spoken to his mother.

"I'll just text her a smiley face," he said.

He had little time to celebrate, with the men's quarterfinals scheduled for Wednesday. Kyrgios will face No. 8 Milos Raonic of Canada, another hard-serving player. Raonic beat No. 10 Kei Nishikori in four sets on Tuesday.

Kyrgios, more than anyone, gave the tournament a jolt of unpredictability. Andy Murray, Federer, Novak Djokovic and Nadal - the Big Four, in tennis shorthand - have won 35 of the past 37 Grand Slam titles. They took turns winning the past four Wimbledon championships and arrived as this year's top four seeds.

Regardless of whether Kyrgios advances further, his breakthrough could help Federer, who was on target to face Nadal, his primary nemesis, in a semifinal. Federer, searching for his eighth Wimbledon singles title, has not lost a set in four matches, including Tuesday's victory over Tommy Robredo. His next task is tougher, against fellow Swiss native Stan Wawrinka, winner of this year's Australian Open.

Only one of those quarterfinalists provide shock value. Kyrgios, in his first Wimbledon appearance, gained notice in last week's second round by withstanding nine match points in a five-set victory over No. 13 Richard Gasquet. One came when Kyrgios challenged a line call and it was overturned, keeping the match alive.

He beat another wild card, Jiri Vesely, in the third round to reach Nadal.

Nadal won Wimbledon in 2008 and 2010, but seems to have a sudden allergy to grass. He lost in the second round in 2012 and was ousted in the first round last year. He lost the first set in each of his first three matches this year before sweeping the opposing upstart from the tournament with building strength.

It looked to be developing the same way against Kyrgios. The men held serve, back and forth, before Kyrgios captured the first set in a 7-5 tiebreaker. Nadal first broke Kyrgios' serve to win the last game of the second set, and the match felt oh-so-slightly tilted in favor of the world's best player.

But Nadal could not shake free, and he could not solve Kyrgios' serve. The third set went to another tiebreaker. Kyrgios prevailed. Each player had won 117 points, but Kyrgios had captured two of the sets.

Nadal had been in similar situations before. On his way to winning Wimbledon four years ago, he twice trailed two sets to one and came back to win in five.

Not this time. Kyrgios broke Nadal for the first time early in the fourth set, and held serve on his own, winning all four points in the final game.

"We had one break each," said Nadal, who felt he played well, but admitted he never solved Kyrgios' serve. "In the tiebreak he was able to serve better than me. So that's an advantage."

Kyrgios is the lowest-ranked player to beat Nadal since No. 690 Joachim Johansson beat him in Stockholm in 2006.

Nadal seems increasingly uncomfortable playing hard-serving, low-ranked players, of the type who have knocked him out of Wimbledon for three years in a row.

Pressed by reporters afterward, Nadal was not ready to declare Kyrgios a great player on his way to the top 10.

"He has things, positive things, to be able to be a good player," Nadal said of Kyrgios. "But at the end, everything is a little bit easier when you are arriving. Everything is new, nothing to lose. Everything is good. Everything is positive. You can do whatever and it will be positive, and everybody see just the good things on you."

Kyrgios admitted that he played with abandon because he did not worry about the consequences. There was no reputation to uphold. Kyrgios called it "a pillow to fall back on."

It was different when Nadal was 19, and he beat the top-ranked Federer in the semifinals of the French Open. Nadal was not an unknown; he was seeded fourth. He beat unseeded Mariano Puerta in the final, the first of nine French Open titles and 14 Grand Slam championships.

By contrast, Kyrgios was added to the Wimbledon field by virtue of winning a second-level grass court event last month, a victory in an event he had considered skipping to go home to Australia.

And he is not the first unseeded, 19-year-old Australian to crack Wimbledon's quarterfinals; Bernard Tomic did it in 2011. Tomic has not made it to a Grand Slam quarterfinal since, and is currently ranked 86th.

Kyrgios did not seem immediately worried about how his career will look years from now. He was happy to hear that his Twitter account surged past 25,000 followers, a recent goal of his, during the fourth set. He was asked if he knew that garnering so many new fans so quickly could be so easy.

"It hasn't been easy at all," he said. "I saved nine match points against Gasquet, came from a set down against Vesely, and just beat Rafael Nadal."

"I finally reached my goal," he said. "It was pretty hard."

Comments
Topics mentioned in this article
Wimbledon 2014 Rafael Nadal Tennis
Get the latest updates on ICC Women's Cricket World Cup 2022 and IPL 2022, check out the Schedule , Live Score and IPL Points Table. Like us on Facebook or follow us on Twitter for more sports updates. You can also download the NDTV Cricket app for Android or iOS.