Li Na, Venus Williams Out of Wimbledon, Novak Djokovic Advances to 4th Round

Second seed Li Na, who had advanced to the quarterfinals three times before at Wimbledon, looked out of sorts for most of the Court 1 match. She blew a set point in the second set. 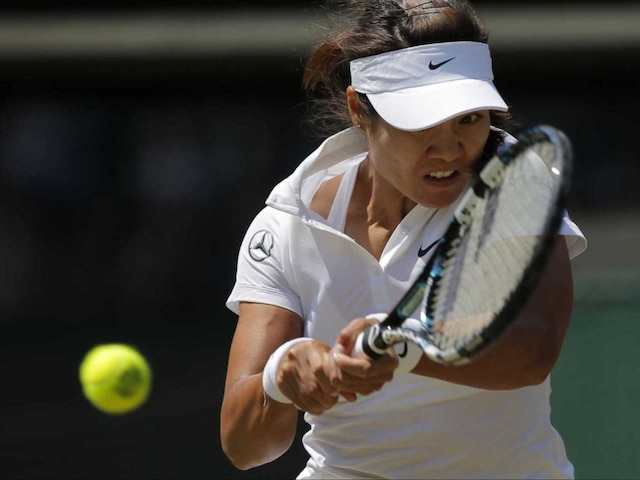 A year that started with another Grand Slam title for Li Na has turned into a major disappointment.

On a day when top-seeded Novak Djokovic had a nasty fall late in his third-round match Friday and five-time champion Venus Williams lost, Australian Open champion Li was eliminated 7-6 (5), 7-6 (5) by Barbora Zahlavova Strycova in the first major upset at Wimbledon.

At the French Open, where she won her first Grand Slam in 2011, Li was beaten by Kristina Mladenovic of France in the first round. The second-seeded Li looked out of sorts for most of the Court 1 match Friday and failed to convert a set point in the second set.

Williams lost 5-7, 7-6 (2), 7-5 to 2011 Wimbledon winner Petra Kvitova. The length of the match was no surprise - the sixth-seeded Kvitova, who broke No. 30 Williams for the first time in the last game of the 2 hour, 30-minute match, had won three of the four previous matches and all had gone to three sets.

Djokovic overcame a hard fall in the third set to advance to the fourth round with a 6-4, 6-2, 6-4 Centre Court win over Gilles Simon. Leading 3-2 in the third set and with Simon serving, Djokovic lunged for a forehand shot and fell hard to the grass, rolling over and grabbing his upper left arm and grimacing in pain.

But after taking a medical timeout and receiving treatment by a trainer, he recovered to play out the final four games of the match, breaking Simon's serve in the final game, his seventh break in the match.

"I basically had a strong impact on the shoulder," Djokovic said. "When I stood up, I felt that click or pop. I feared maybe it might be a dislocated shoulder ... or joint problem.

"But luckily for me it was only an impact that had a minor effect on the joint and the muscles around, but no damage, significant, that can cause a bigger problem. I just came from the doctor's office, ultrasound. It's all looking good."

Djokovic will next play Jo-Wilfried Tsonga, who beat Jimmy Wang of Taiwan 6-2, 6-2, 7-5, in the fourth round on Monday.

"There is two days off, I'm going to try to recover and get ready," Djokovic said.

Zahlavova Strycova called her win over Li the biggest of her career. Li won the first of her two Grand Slam titles at the French Open in 2011 and had reached the quarterfinals at Wimbledon three times.

"When you go on court you have to believe in yourself," the 43rd-ranked Zahlavova Strycova said. "I thought I could do it and I was pushing myself a lot."

The Czech player thought she had won the match and went to the net to shake Li's hand after a forehand was called out. But Li challenged the call and the ball was ruled in, continuing the match - until Li double-faulted on match point.

"I was so happy already that the match is over, and then suddenly she took the challenge and I had to get back to my concentration," Zahlavova Strycova said.

In other matches, No. 4 seed Agnieszka Radwanska beat Michelle Larcher de Brito of Portugal 6-2, 6-0 and French Open finalist Simona Halep and former No. 1 Caroline Wozniacki advanced earlier after rain delayed the start of play for about 30 minutes.

Halep, who lost the Roland Garros final to Maria Sharapova, had a 6-3, 4-6, 6-4 win over Lesia Tsurenko of Ukraine in a second-round match.

Wozniacki moved into the fourth round following a 6-3, 6-0 win over Ana Konjuh of Croatia and Peng Shuai of China did the same after beating American Lauren Davis 0-6, 6-3, 6-3.

Hewitt broke the Open era record for the most five-set matches played at Grand Slam tournaments. The loss to Janowicz was his 42nd five-set match, breaking the mark of 41 he had shared with Andre Agassi.

Comments
Topics mentioned in this article
Wimbledon 2014 Novak Djokovic Na Li Tennis
Get the latest Cricket news, check out the India cricket schedule, Cricket live score . Like us on Facebook or follow us on Twitter for more sports updates. You can also download the NDTV Cricket app for Android or iOS.