VVS Laxman has sent out a message to the selectors: Ganguly

Former India captain Sourav Ganguly on Saturday said that VVS Laxman has sent out a ''loud and clear'' message to the selectors by deciding to quit international cricket with immediate effect. 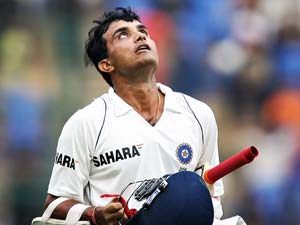 Former India captain Sourav Ganguly on Saturday said that VVS Laxman has sent out a ''loud and clear'' message to the selectors by deciding to quit international cricket with immediate effect.

"Srikkanth has a big problem in communicating. A player like Laxman would not train so hard just to keep himself fit for two Tests. If they (selectors) conveyed their opinion to Laxman earlier, this situation would not have surfaced. Why they stretched till August? Probably, the selectors' judgment has hurt him (Laxman) the most," Ganguly said.

"They don't select a team taking the future of Indian cricket into account. They merely do a balancing act by means of removing and adding somebody. Indian cricket will not progress this way."

Someone who doesn't mince words, Ganguly was also surprised to find Laxman state at the press conference that the latter "found it difficult to reach Dhoni."

"A skipper should be available for his players 24 hours. I don't know why Dhoni does this... But I think situation would have been different, if Laxman had got Dhoni's support," Ganguly said.

"Making this sound like a farewell series (for Laxman) does not make any sense. It's a fantastic decision... By this he has sent a loud and clear message to the selectors."

Ganguly feels that the decision was a tough one.

"Probably, it was the toughest decision, tougher than me. I was playing (in a series) and then took the decision. But in his case, he does not have a future in IPL... He was training very hard for about four months at NCA and expecting to play this season when he had to take a call. Hats off to Laxman. He is 200 per cent right in his decision."

The former captain was also not happy that Laxman became a scapegoat for India's 0-8 overseas Test record as lot of other players have also done miserably.

"Even (Mahendra Singh) Dhoni, (Gautam) Gambhir, Ishant (Sharma) failed in Australia. It's a complete case of treating unequally. Age cannot be a factor," he said pointing out India's tour Down Under.

"I was doing commentary in that series. It was green-top all the way and Ishant could take only five wickets from four Test matches. If Laxman is singled out, then why not others?" he questioned.

"If this is the policy, then we will never be able to build a good side."

Ganguly also had a word of caution for Team India in the upcoming England and Australia series later in the year.

"I'm not sure about the outcome of the NZ series as they are a comparatively weaker side. But it would not be easy at home against England and Australia."

Comments
Topics mentioned in this article
VVS Laxman Sourav Ganguly Ricky Ponting Marcus Trescothick Sven Lehmann Cricket Chennai Super Kings India vs West Indies 2011 Krisnamachari Srikkanth
Get the latest updates on ICC T20 Worldcup 2022 and CWG 2022 check out the Schedule, Live Score and Medals Tally. Like us on Facebook or follow us on Twitter for more sports updates. You can also download the NDTV Cricket app for Android or iOS.