India A vs West Indies A: Permaul, Miller put visitors on top, Indians hope for miracle

West Indies A spinners Veerasammy Permaul and Nikita Miller bundled India A batsmen out for 245 in their first innings while Kraigg Brathwaite and Kieran Powell ensured that the hosts remain under the pump going into the last day of the first unofficial Test. 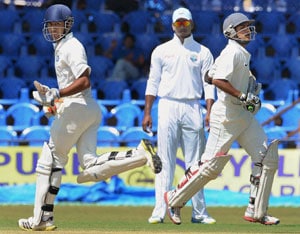 Pitch conditions that West Indies A exploited and India A couldn't, coupled with the West Indians' superior bowling and batting performances, meant the visitors ended the third day of their four-day game in Mysore with their noses well in front. India A were bowled out for 245, and leading by 184, West Indies reached 130 for 3 in their second innings at close of play.

India A resumed Friday (September 27) on 124 for 3, a lot depending on how well Manpreet Juneja and Harshad Khadiwale, the overnight batsmen, handled the first session. They did well to start with, Khadiwale providing the steel and Juneja keeping the scoreboard moving on a pitch where the ball stopped a bit on pitching.

There was much to like about Khadiwale's innings, especially in how he was happy to be unglamorous, but when Juneja, a young man with immense talent, ability and hunger for runs, gets going, it's difficult to focus on much else.

Overnight 47, Juneja brought up his half-century soon enough and then started scoring at a fairly healthy clip. The going wasn't easy and patience was the key to survival, but he still managed to find the boundaries - 11 of them - without appearing to try too hard.

With the pitch being the way it was and Delorn Johnson and Miguel Cummins, the tall pacers, getting little out of it, Veerasammy Permaul and Nikita Miller, the spinners, did most of the bowling. And though no batsman can claim to have dominated them, while Juneja was around, India A looked well placed. He also dented Miller a little when, after an angry exchange following him stopping Miller in his delivery stride, Juneja slog-swept the very next delivery over midwicket for four.

He looked good for many more than 84 when, just before lunch, Permaul had him lbw. It was a somewhat questionable decision, Juneja's front foot well down the track as he attempted to defend, but Amiesh Saheba, the umpire, went with the vociferous appeal.

The score at that stage was 184 for 4, but the innings unravelled quickly after that. Juneja was dismissed in the 68th over, and by the 78th, India A were gasping for breath at 205 for 8, with Rajat Paliwal, Khadiwale (27), Parvez Rasool and Mohammad Shami all back in the hut.

That they managed to reach 245 was mainly down to Rohit Motwani's battling unbeaten 28 and a couple of lusty hits from Ishwar Pandey and Ashok Dinda right at the end.

Permaul and Miller, who bowled 44.3 of the 53 overs in the Indian innings on the day, did all the damage. Permaul had impressive returns of 5 for 85 and Miller wasn't far behind with 4 for 61. 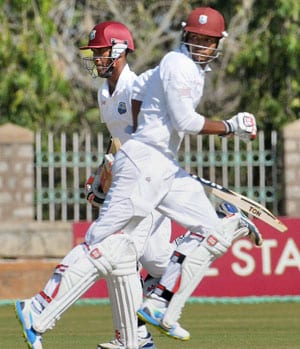 West Indies A had the option of enforcing the follow on, but probably not wanting to bat last on the crumbling pitch, they came out to bat on a second time.

The force continued to stay with the West Indians, and bar Shami, none of the Indian bowlers troubled Kieran Powell and Kraigg Brathwaite, who looked as if they were batting on a completely different pitch. Even Rasool, expected to get help from the pitch, looked nowhere near as dangerous as Permaul and Miller.

Shami managed to beat both batsmen around the off stump and found Powell's edge too, but the chance went between Motwani, the wicketkeeper, and Cheteshwar Pujara at first slip, neither fielder going for the catch.

Apart from that, it was mostly about Powell's belligerence and Brathwaite's patience. As Brathwaite was happy to rotate the strike, Powell made up for his first-innings duck by going after the pacemen first and then Rasool, who was introduced in the 16th over.

The breakthrough finally came after a 112-run stand and it was courtesy Paliwal, the back-up spinner. Powell, who had hit nine fours and two sixes in his 89-ball 68 couldn't get enough elevation as he went for one big hit too many, and found Paliwal diving across to grab the caught and bowled chance, going down with non-striker Brathwaite in the process.

One spot of success led to another and in the very next over, Rasool trapped Brathwaite (34) plumb in front with one that stayed low. It got somewhat better for the Indians when Rasool beat Narsingh Deonarine's (9) defence to hit timber off what turned out to be the last ball of the day. But the lead had been stretched to 314 by then with Kirk Edwards (9) holding fort.