'Sehwag, the king of entertainment' 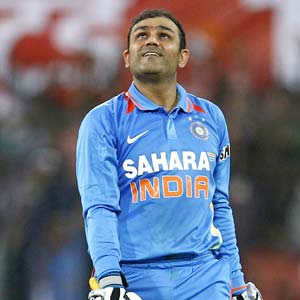 "I am very happy for Viru. It is even more satisfying that an Indian has broken my record."
Sachin Tendulkar, the only other batsman to have hit an ODI double-ton to date

"Well I did watch some of that innings by Viru... Brilliant striking!! Congrats on your 219... That's child abuse! [As] The Mask would say, Smoking!"
West Indies batsman Chris Gayle on Twitter

"I say it again! I never saw Sir Viv bat but I've seen Sehwag bat! What a player, 219 in a one day game is next to impossible!"
Sehwag's team-mate Yuvraj Singh on Twitter

"Wow, Test match tomorrow but am still up watching Virender Sehwag score, hopefully, 200. Unreal, and he does [get the] highest ever. Well done mate."
Australia's David Warner on Twitter

"When Viv Richards retired I thought it was end of entertainment. But then came Sehwag, the King of entertainment! Long live the King!!"
TV commentator and former Pakistan captain Ramiz Raja on Twitter

Comments
Topics mentioned in this article
Cricket West Indies vs India 2011 West Indies Cricket Team Virender Sehwag India Cricket Team India vs West Indies 2011
Get the latest updates on IPL Auction 2023 and check out  IPL 2023 and Live Cricket Score. Like us on Facebook or follow us on Twitter for more sports updates. You can also download the NDTV Cricket app for Android or iOS.