Dhawan's return to boost Sunrisers in absence of Perera, Sangakkara

That Hyderabad have won five of their seven games has been largely due to the efforts of their bowlers whereas their batting has been the weak link. In their five completed innings, they have managed an average score of only 134. 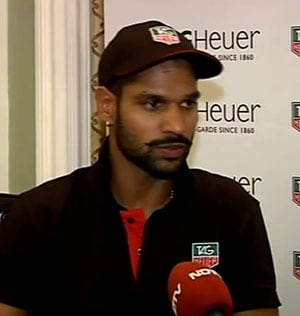 If the loss of Thisara Perera, the in-form allrounder, and Kumar Sangakkara, their captain, was a deterrent for Sunrisers Hyderabad going into their match against Chennai Super Kings at the MA Chidambaram Stadium in Chennai on Thursday (April 25), then it has been somewhat compensated for by the availability of Shikhar Dhawan.

Dhawan had fractured his finger while fielding on his Test debut against Australia in Mohali last month and missed the early part of the Pepsi Indian Premier League. Krishnamachari Srikkanth, the chief mentor of Hyderabad, confirmed that Dhawan would be available for the Chennai match. "The best news is that Shikhar Dhawan is back and will be playing his first IPL match this season," he said. "It will be a big boost to our batting strength."

Asked who would replace Perera, Srikkanth preferred to play his cards close this chest, though he did indicate that one of Nathan McCullum or Darren Sammy would get a game. "I do not want to announce the team now. We have options like McCullum, an offspinner-allrounder, and Darren Sammy, who has led the West Indies successfully. One of them may come in."

That Hyderabad have won five of their seven games has been largely due to the efforts of their bowlers whereas their batting has been the weak link. In their five completed innings, they have managed an average score of only 134. However, Srikkanth was buoyant about his team's batting abilities. "The focus has been on fostering young talent. We are confident of putting up a good total on the board tomorrow."

Quinton de Kock, the South African wicketkeeper-opener who replaced Sangakkara in the last two games, has struggled in subcontinental conditions but Srikkanth backed him to come good. "He is a swashbuckling batsman. He has played only two games and you cannot judge based on that," he said. "He is just 20 and has had a terrific season in South Africa."

Hyderabad have failed to accelerate towards the closing stages of their innings, something Chennai have mastered. Srikkanth felt it was not right to compare teams since each of them played to their strengths.

"We do not want to be compared with other teams. Teams play to their strengths. Our team is positive and the atmosphere is positive in the dressing room. Cricket is not an individual game. It is a team game," he said. "We are hopeful of getting into the semifinals. Our first level dream is to do that. Bowling is our strength. In a T20 game, anything may happen."

When Hyderabad started their campaign, not many gave them a chance. However, they have so far defied expectations, defending smallish totals and winning five of their seven games. Srikkanth credited the success to the attitude in the team.

"Positive approach, self belief and right approach is the team mantra," he said. "We are fighting it out. Fighting spirit and team spirit are the biggest pluses. We have not at any given stage given up. That is where positive approach comes and the most important thing is that the feeling of togetherness and belonging are already there. The players strongly feel that they belong to the Sunrisers."