Top-seeded Vera Zvonareva had to battle for over three hours to beat Georgia's Anna Tatishvili 7-5, 6-7 (4), 6-2 on Friday and reach the semifinals of the Baku Cup. 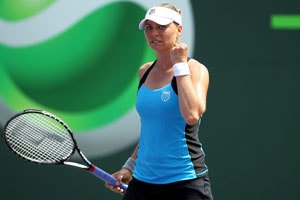 Top-seeded Vera Zvonareva had to battle for over three hours to beat Georgia's Anna Tatishvili 7-5, 6-7 (4), 6-2 on Friday and reach the semifinals of the Baku Cup.

The Russian found it difficult to deal with a spirited opponent who had a powerful forehand and who was able to stay the pace in some closely-contested baseline rallies.

After only narrowly losing the first set it was Tatishvili who held the only two break points of the second set before claiming the tiebreaker. Although she maintained her challenge in the final set, it was the Russian who won the crucial points.

Zvonareva lined up a match on Saturday against 165th-ranked Mariya Koryttseva, who advanced by defeating Ukrainian compatriot Kateryna Bondarenko 7-5, 6-4 despite it being only her second tournament this year.

Neither player managed to dominate in a scrappy match, but Koryttseva looked better able to deal with the 100 (38) degree heat.

Pavlyuchenkova served up 27 double faults, after she had managed to win her opening match at the tournament despite 25 double faults. The Russian missed a chance to serve out the first set, hitting three straight double faults to take the set into the tiebreaker.

Voskoboeva was sharper in the next two sets, combining some fine passes with well-timed drop shots. She broke serve for the ninth time in the match to claim victory.

She will now take on seventh-seeded Russian Ksenia Pervak, who reached her second successive semifinal by ousting Aravane Rezai of France 6-1, 6-2.

Comments
Topics mentioned in this article
Tennis US Open 2011 Anastasia Pavlyuchenkova Somdev Devvarman Serena Williams Alisa Kleybanova Anna Tatishvili Vera Zvonareva
Get the latest Cricket news, check out the India cricket schedule, Cricket live score . Like us on Facebook or follow us on Twitter for more sports updates. You can also download the NDTV Cricket app for Android or iOS.