Yuki Bhambri got a big career boost by winning the play-off tournament in Shenzhen, China, on Saturday, to earn himself a Grand Slam debut. 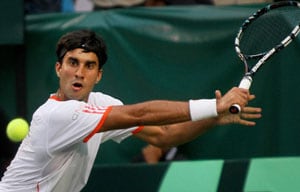 For young Yuki Bhambri, it was a 'Mission Accomplished' after he earned a wild card to play in Australian Open men's doubles event joining the list of illustrious names, who had represented the country in Grand Slam events.

Divij Sharan and Purav Raja also made it to that list this year when they played at Wimbledon and US Open.

Now Yuki has got a big career boost by winning the play-off tournament in Shenzhen, China, on Saturday, to earn himself a Grand Slam debut.

He could not win the singles tournament, bowing out in the semifinals, but the 21-year-old triumphed in the doubles with New Zealand's Michael Venus.

So, is it mission accomplished? "Yes, definitely," Yuki told PTI from Shenzhen.

Yuki said since the play-off tournament was his last in the 2013, there was no better way to end the season.

"Since October, when I got to know about this event, I had wanted to try for the doubles and I am very happy about getting it."

Yuki was junior world number one but struggled to make transition on the senior pro circuit. Injuries to his ankle just added to his frustration. But he has fought all the odds to make a good progress in the last six months.

Winning the Traralgon Challenger, where he even beat the top-100 players was an indication that he is steadily moving forward. Hence after all this struggle the happiness and satisfaction was written all over.

"It means a lot to me, that was my goal for the year end and to end 2013 on such a positive note is incredible. I mean main draw of a Grand Slam event - a chance to play against the greats is awesome," he said, summing up his mood and jubilation.

Comments
Topics mentioned in this article
Tennis Somdev Devvarman Serena Williams Yuki Bhambri Divij Sharan Alisa Kleybanova Anastasia Pavlyuchenkova US Open 2011
Get the latest updates on Fifa Worldcup 2022 and check out  Fifa World Cup Schedule, Stats and Live Cricket Score. Like us on Facebook or follow us on Twitter for more sports updates. You can also download the NDTV Cricket app for Android or iOS.