Wounded US veteran inspires as ballboy at US Open

From a routine patrol crossing a muddy ditch in Afghanistan, where a land mine blast changed his life in a split-second, to the hothouse of the US Open, American soldier Ryan McIntosh has come a long way. 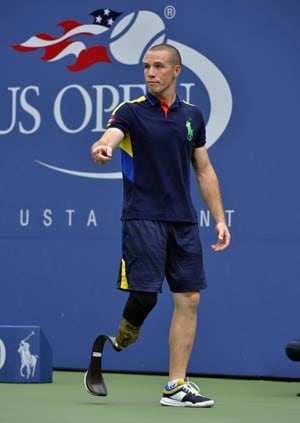 From a routine patrol crossing a muddy ditch in Afghanistan, where a land mine blast changed his life in a split-second, to the hothouse of the US Open, American soldier Ryan McIntosh has come a long way.

Two years ago, McIntosh, just 21, lost part of his right leg when he stepped on a mine planted by the Taliban in the deadly province of Kandahar.

The explosion launched him 10 feet into the air, the bloody shock of the horror attack knocking him unconscious with surgeons having no choice but to amputate his right leg below the knee.

But with a wife and a son to support, and another child on the way, McIntosh has refused to surrender to his disability and when he tried out with 600 other hopefuls to become a ballboy at the US Open, he already had a unique advantage.

McIntosh is still in the army, working as a sports coach with other disabled servicemen and women at Fort Sam Houston in Texas.

On Monday, at the US Open, he was centre-stage on the showpiece Arthur Ashe Stadium during American star Serena Williams's fourth-round match.

It was an emotional moment for McIntosh as the occasion coincided with the tournament's Military Appreciation Day where he, as well as other US Army, Navy and Air Force personnel, were given a standing ovation by the 20,000 crowd.

McIntosh, who relies on a carbon fibre blade prosthetic while on court, doesn't over-dramatise the horror of his tour of duty, preferring to emphasise that he wants to be an inspiration to other wounded servicemen and his son.

"It was a routine mission. We were heading back to base, in single file. I was number six when we were moving through the country," he said.

"We were crossing a canal and suddenly I just blacked out. I was thrown 10 feet into the air and fell into a ditch. When I came to, I heard everyone yelling, 'IED (improvised explosive device).'

"I started crawling. My buddies were screaming, 'Where's Mac? Where's Mac?' Then I realised it was me who was hurt. I stuck my hand up and they started working on me."

Back home in Texas, his wife Hannah was waiting and now their son Kaden, 16 months old, is McIntosh's inspiration.

"Knowing I had a son, I wanted to be at his side, coach him, give him a push," said McIntosh.

"I also want other wounder soldiers to know that even though what happened can be an obstacle, at the same time the human will is very powerful and you can overcome those obstacles."

Comments
Topics mentioned in this article
Tennis Leander Paes Maria Sharapova Sania Mirza Tiger Woods US Open 2012 US Open 2011
Get the latest updates on Fifa Worldcup 2022 and check out  Fifa World Cup Schedule, Stats and Live Cricket Score. Like us on Facebook or follow us on Twitter for more sports updates. You can also download the NDTV Cricket app for Android or iOS.