Victoria Azarenka sets up final vs Serena Williams in Rome

Azarenka, the third seed, proved too strong for Italian hopeful Sara Errani in a 6-0, 7-5 win in the other semi-final that was interrupted by rain twice and once by Errani, who called for her coach after losing the first three games. 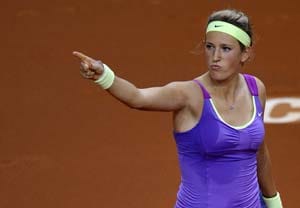 World number one Serena Williams said she hoped to improve her game for the French Open after easing into the Rome Open final with a 6-3, 6-0 win over Simona Halep which ended the qualifier's dream week in the Italian capital.

Serena, the 15-times Grand Slam winner, stretched her run of consecutive wins to 23 on her way to Sunday's final, where she will meet Victoria Azarenka in a final for the first time since her defeat to the Belarusian earlier this year in Doha.

Azarenka, the third seed, proved too strong for Italian hopeful Sara Errani in a 6-0, 7-5 win in the other semi-final that was interrupted by rain twice and once by Errani, who called for her coach after losing the first three games.

Serena, meanwhile, will head to next week's French Open as one of the favourites and with revenge on her mind after a shock defeat in last year's tournament to Frenchwoman Virginie Razzano.

Ahead of that challenge, the 30-year-old American will be hoping for a more telling workout against Azarenka after a limpid semi-final in which Romanian Halep failed to offer any kind of challenge.

Serena was so unhappy with her match that she went to practice for two hours before speaking to reporters, and said: "I am only unhappy with the way I played and I need to work on a few things and be able to do well here and next week."

Asked about Azarenka and their last final encounter in the Gulf, the American indicated she expects an altogether different challenge on Sunday.

"She played well in that match (in Doha) and I was happy in the final," said Serena. "It was a tough tournament and I had opportunities that I wasn't able to use, and Viki plays well in the vital points."

Errani had been gifted a place in the semi-final when defending two-time champion Maria Sharapova of Russia withdrew early on Friday citing a fever.

However it was clear from the start that the Italian would be up against it.

In spite of the hot and humid conditions, Azarenka barely broke sweat on her way to a first-set whitewash.

Errani, who had beaten the Belarusian only once in their six previous encounters, emerged with bigger ambitions in the second set.

But despite battling all the way, she was ultimately broken in the 10th game before Azarenka served to take a 6-5 lead.

Errani valiantly saved three match points in the final game but was finally broken by the more powerful Belarusian.

Comments
Topics mentioned in this article
US Open 2011 Tennis Alisa Kleybanova Serena Williams Somdev Devvarman Anastasia Pavlyuchenkova Victoria Azarenka
Get the latest updates on ICC T20 Worldcup 2022 and CWG 2022 check out the Schedule, Live Score and Medals Tally. Like us on Facebook or follow us on Twitter for more sports updates. You can also download the NDTV Cricket app for Android or iOS.