US teenager Christina McHale toppled eighth-seeded Frenchwoman Marion Bartoli in straight sets on Wednesday to reach the third round of the US Open tennis championships. 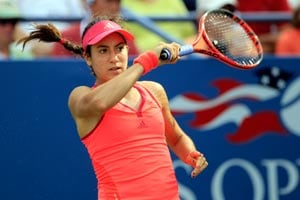 US teenager Christina McHale toppled eighth-seeded Frenchwoman Marion Bartoli in straight sets on Wednesday to reach the third round of the US Open tennis championships.

McHale finished with a flourish, firing an ace past Bartoli, a French Open semi-finalist this year, on match point.

"I'm so excited to have beaten a player like Marion, especially to have it happen here at the US Open," McHale said.

She defeated world number one Caroline Wozniacki earlier this year, but said the fact that this victory saw her make it to the third round of a Grand Slam for the first time made it special.

"I think they're different wins," she said. "That was a good win for me, too, but to have it happen here at the Grand Slam is exciting for me."

McHale said one concern she had in the match was to maintain her focus once she took the lead in the second set.

Bartoli said the youngster was just too good for her on the day.

"I think I played a fairly good match, but she deserved to win. She was on fire. She played the prefect match. She moved so well - I had to hit five or six winners to win one point."

Comments
Topics mentioned in this article
Tennis Leander Paes Marion Bartoli Maria Sharapova Christina McHale Sania Mirza US Open 2011 Tiger Woods
Get the latest updates on India vs Australia Series, check out the India vs Australia Schedule for 2020-21 and Ind vs Aus live score . Like us on Facebook or follow us on Twitter for more sports updates. You can also download the NDTV Cricket app for Android or iOS.