The 25-year-old from Bilbao, who plays on the lower level Challenger and Futures circuits, was sanctioned on three charges under the Uniform Tennis Anti-Corruption Program (UTACP). 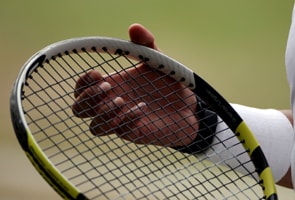 Spain's world number 236 ATP player Guillermo Olaso was banned for five years and fined USD 25,000 on Monday after being found guilty of match-fixing.

The 25-year-old from Bilbao, who plays on the lower level Challenger and Futures circuits, was sanctioned on three charges under the Uniform Tennis Anti-Corruption Program (UTACP).

A spokesman for the Tennis Integrity Unit (TIU) said that all the offences took place in 2010.

"The final 18 months of the five-year period of ineligibility will be suspended providing that the player has attended authorised anti-corruption education and rehabilitation programs, that the USD 25,000 fine has been paid in full by that time and that he commits no further breaches of the UTACP," said a TIU spokesman.

"The five-year ban applies with immediate effect and means that Mr Olaso is not eligible to participate in any tournament or competition organised or sanctioned by the governing bodies of professional tennis from the date of this statement."

Olaso has won 10 titles on the Futures tour but has played only three times on the main ATP Tour.

His prize money from his eight-year career is just under USD 250,000.

Olaso is the latest player to fall foul of the sport's corruption rules.

In September, Italian teenager Claudia Coppola, who was world number 869 in the women's game at the time, was banned for six months and fined USD 4,000 on match-fixing charges.

In June, Dutchman Yannick Ebbinghaus was suspended for six months for betting illegally on matches while just a few days earlier Russian Sergei Krotiuk was given a life ban for match-fixing.

Krotiuk was the third man in two years to receive a life ban for match-fixing following Serbia's David Savic and Austria's Daniel Koellerer who once made 55 in the world rankings.

Comments
Topics mentioned in this article
Tennis Serena Williams Somdev Devvarman Alisa Kleybanova Anastasia Pavlyuchenkova US Open 2011
Get the latest updates on Fifa Worldcup 2022 and check out  Fifa World Cup Schedule, Stats and Live Cricket Score. Like us on Facebook or follow us on Twitter for more sports updates. You can also download the NDTV Cricket app for Android or iOS.