In the entire 2012 season post rehabilitation from shoulder injury, Somdev Devvarman could win just two matches out of nine he played. In the process, his ranking plummeted to 664. 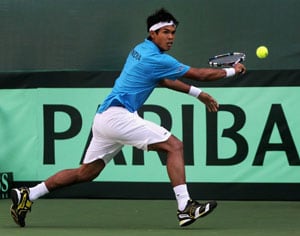 When Somdev Devvarman was at the peak of his career in 2011, a shoulder injury put a brake on his ascendancy but the gritty Indian says he has taken the tough period in his stride and is now aiming to re-enter the top-100 by the end of this season.

Somdev re-established India on the singles map with his memorable wins on the Tour and in Davis Cup. That he was gradually becoming a force to reckon with reflected in his singles ranking when he touched a career-best 62 in mid-2011.

However, a shoulder injury late in 2011 and a resultant surgery in early 2012, hit Somdev's career graph badly.

In the entire 2012 season post rehabilitation, he could win just two matches out of nine he played. In the process, his ranking plummeted to 664.

However, in the second half of the current year, he has again started to regain his space. He has moved to 113 on the back of his good run in the Challengers post Roland Garros.

Asked how he looks back at the tough period and could it have been different had he not suffered the shoulder injury, Somdev said he prefers to look ahead.

"It's difficult to say how my career would've progressed if I hadn't got injured when I did. But I was playing some good tennis at that point. However, injuries are a part and parcel of the sport and I've taken it in my stride," Somdev told PTI in an interview.

Now that he is getting back to his usual fighting self, demanding every single ounce of energy his opponent has in him to get the better of him, Somdev is now eyeing the top-100 bracket in the ATP rankings.

"Remain healthy, fit and injury free! To finish the year top-100 would also be great," he said.

It took Somdev a long time to get back to his winning ways. In the first half of the season, he struggled to get past even Qualifiers in big events.

But Somdev said he never lacked energy or the fighting spirit in the face of consistent defeats.

"I never really lost the drive or the never-give-up attitude," he said.

At the French Open, from qualifying, he reached the second round where he lost to none other than Roger Federer. Then he made three semifinals on the Challenger tour.

"I've been working really hard on my game on and off the court and it's nice to have some good results," he said.

At the Washington ATP 500 event, the last tournament he played, he clashed with American John Isner, whom he had defeated to win his first NCAA title in 2007.

However, this time Somdev was a struggling player while Isner was in the top-20.

"It was a tough match. John is one of the biggest servers on tour and playing someone like him is never going to be easy," he said.

There has been a trend that Indian players opt for doubles after a certain period, with Sania Mirza being the latest one. In the past, Leander Paes, Mahesh Bhupathi and Rohan Bopanna also gave up singles and became outstanding doubles players.

But Somdev says he has no plans to turn a dedicated doubles player as such.

"I think it's great that so many Indians are doing well at such high levels, be it singles or doubles. Right now I'm focused on my singles career."

Somdev had launched Indian Tennis Players Association (IPTA) early this year but not much has been heard about it after that.

Asked on this front, Somdev said," I haven't had any interactions with the AITA with regards to the IPTA. I am in constant touch with all the players though and we do hang out whenever we're on tour together."

Comments
Topics mentioned in this article
Tennis US Open 2011 Alisa Kleybanova Anastasia Pavlyuchenkova Serena Williams Somdev Devvarman
Get the latest updates on Fifa Worldcup 2022 and check out  Fifa World Cup Schedule, Stats and Live Cricket Score. Like us on Facebook or follow us on Twitter for more sports updates. You can also download the NDTV Cricket app for Android or iOS.