Robin Soderling of Sweden will play Marin Cilic of Croatia in the final of the Open 13 on Sunday. 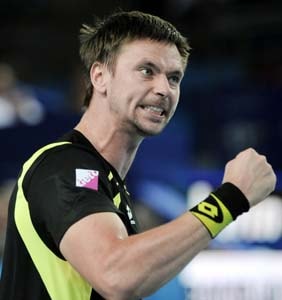 Robin Soderling of Sweden will play Marin Cilic of Croatia in the final of the Open 13 on Sunday.

The top-seeded Swede has now won 16 of 17 matches this year, clinching titles in Rotterdam last weekend and in Brisbane last month.

"I have a lot of confidence and I'm playing really well right now," Soderling said. "I really feel that I can play my own game and be aggressive on the important points."

The unseeded Tursunov was betrayed by his serve at key moments, while Soderling played solidly in his service games, not conceding any break chance.

Soderling took the first set on a double-fault from Tursunov, a former top-20 player whose career has been hampered in the past two years by a nagging ankle injury.

Another double-fault from Tursunov gave Soderling three break chances in the next set at 1-0. Tursunov erased the first two break points with a pair of aces. But Soderling converted the third one in a long rally, frustrating Tursunov with some outstanding defense before the Russian sent a backhand into the net.

Soderling slammed an ace on a second serve to lead 3-0 before another double fault from Tursunov gave the Swede three break chances in the next game. Tursunov dropped again serve on an unforced error.

Soderling fired an ace clocked at 212 kilometers per hour to go 5-0 up and won the match when Tursunov netted a forehand return.

"I wasn't maybe aggressive enough in the beginning," Soderling said. "At the end (of the first set), I told myself to be a little more aggressive. It brought out some mistakes from him."

In the first semifinal, the unseeded Cilic double-faulted at 5-3 to face a match point, but saved it by slamming an ace.

Cilic rallied at 5-5 when Youzhny sent a backhand into the net and then clinched victory when a forehand from the third-seeded Russian sailed long.

"It's for me a big relief to come back against this kind of player and also to back it up with yesterday's win," said Cilic, who upset Tomas Berdych of the Czech Republic in the quarterfinals. "It shows that I was waiting for this moment for a while and I'm satisfied with (my) on-court mentality. I was there fighting for my chance even though I wasn't playing great."

Cilic broke into the top 10 a year ago but has struggled since then to be consistent, slipping to 28th in the world rankings.

The Croatian baseliner dictated the points with his powerful groundstrokes in the first set, hitting 10 winners to four for Youzhny.

Cilic put Youzhny under pressure right from the start by breaking serve in the opening game.

He double-faulted at 3-2 to hand Youzhny a chance to break back, but Cilic managed to hold serve with an ace clocked at 194 kilometers per hour.

In the seventh game, when Cilic hit a forehand on the line, Youzhny stopped playing the point but lost his Hawkeye challenge, giving Cilic two break chances. Cilic converted the second for a 5-2 lead when Youzhny sent a backhand into the net.

Cilic took the first set when a backhand return from Youzhny went long.

Youzhny fought back in the second set by mixing up his shots and changing speeds, especially with his backhand slice. He also served better, landing 80 percent of his first serves and cracking five aces.

Cilic made 11 unforced errors to five for Youzhny in that set.

Youzhny won five straight games to level at one set apiece with a service winner as Cilic dropped serve twice, each time on an unforced forehand error.

Youzhny seemed to have the match under control in the last set as he whipped a forehand winner down the line to break Cilic in the fifth game. He then fired two aces, and hit a backhand volley and a smash to hold serve and lead 4-2.

"It was really amazing that I came back and that I had a chance to win," Cilic said. "From the beginning of the second set until 4-2 in the third, he was playing extremely well. He was almost making two aces per game. He was making me work a lot."

It is the first final for Cilic since the BMW Open last May in Munich. He will chase a sixth career title.

Comments
Topics mentioned in this article
US Open 2011 Sweden Colin Fleming Rohan Bopanna Croatia Marin Cilic Tennis
Get the latest Cricket news, check out the India cricket schedule, Cricket live score . Like us on Facebook or follow us on Twitter for more sports updates. You can also download the NDTV Cricket app for Android or iOS.