Serena Williams gets off easy - just this once

A day after losing the US Open final, Serena Williams was hit with a $2,000 fine for berating the chair umpire during her match against Samantha Stosur. 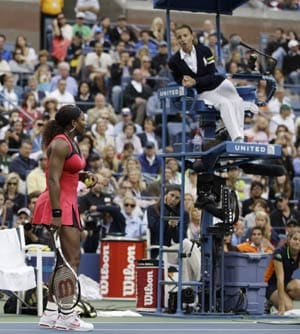 A day after losing the US Open final, Serena Williams was hit with a $2,000 fine for berating the chair umpire during her match against Samantha Stosur. It seemed like an open-and-shut case.

Former tennis great Chris Evert, one of only three women in the open era to win more majors than Williams (18 to 13), said she "was so surprised how disrespectful and rude" Williams was to umpire Eva Asderaki and called the $2,000 hit "like dinner for Serena."

Evert wasn't far off, considering the runner-up's share in the final was $900,000, and that Williams came into the tournament already well north of $20 million in career earnings. But more interesting than whether the fine was too light for Williams is whether it's enough to be effective for any player in an era when prize money has climbed into the stratosphere. More interesting still might be whether any other player - man or woman - would have been fined for saying so little.

For background purposes, this is the short version of how tournament referee Brian Earley settled on $2,000 after talking the matter over with several Grand Slam and US Tennis Association officials. The standard fine for run-of-the-mill verbal abuse is $1,500; the maximum is $10,000. A few of those officials described Williams' outburst Sunday as something worthy of a "fourth-grader" but not a fine. But because this is hardly the first time Williams has acted out, and because her memorable 2009 US Open tirade was anything but run-of-the-mill - "If I could, I would take this ... ball and shove it down your ... throat," she menacingly shouted at a line judge at one point - a consensus eventually emerged to treat her like a repeat offender. Thus, the extra $500.

Nothing Williams said this time around was remotely obscene or threatening. It began soon after Williams, already down a set and facing a break of serve in the second, yelled "Come on!" to pump herself up after rocketing an apparent winner against Stosur. Because her opponent somehow managed to get a racket on the ball - though she wasn't close to returning it - the umpire invoked the hindrance rule and awarded the point to Stosur, putting the Australian ahead 1-0 in that set. Williams then launched volley after verbal volley at Asderaki.

"If you ever see me walking down the hall, look the other way, because you're out of control. ... You're a hater, and you're just unattractive inside. Who would do such a thing? ... Give me a code violation because I expressed my emotion? We're in America last time I checked. Really, don't even look at me, don't look my way."

Williams didn't shake hands with Asderaki after the match, though she was gracious in defeat and toward Stosur before and while the hardware was being handed out. Afterward, she said only, "I guess I'll see it on YouTube."

It's worth a look, since lost in the ensuing controversy was perhaps the most interesting moment of all. By all rights, Stosur should not have even reached the shot, and if she hadn't, the umpire almost certainly doesn't call hindrance. It's a tribute not just to how well she was playing, but how unruffled. When the point ends, she simply heads for the deuce court and prepares to play the next point.

"Everything was happening so fast," Stosur said in an interview on the "Early Show" a day later. "I was just trying to get the ball and before I knew it, then there was all of that commotion up at the net. I just tried to think about what I was doing for the next point and get on with it, really."

Williams took plenty of heat for deflecting the spotlight, but Stosur didn't seem bothered by that, either. In her postmatch news conference, she lauded Williams: "Serena, you are a fantastic player, great champion and have done wonders for our sport."

That message wasn't wasted on tournament officials. Because of her 2009 tirade, Williams was initially fined the maximum - $10,000 - then bumped all the way up to $82,500 after a review and placed on probation for the 2010 and 2011 Grand Slam seasons. Another major violation would have barred her from the next US Open.

TV ratings for this final were up 121 percent from last year, when Kim Clijsters beat Vera Zvonareva. No one else moves the needle the way Williams does. Not top-ranked Caroline Wozniacki, who has yet to win a Grand Slam, nor the women who won majors - Clijsters at the Australian, Li Na at the French and Petra Kvitova at Wimbledon - while Williams was recuperating from a career-threatening foot injury and life-threatening blood clots.

All that attention, needless to say, comes with a price. During Sunday's outburst, Williams yelled at Asderaki, "Aren't you the one who screwed me over the last time I was here? You have it out for me?"

The answer to both questions was no. But it's not hard to see where sometimes, Williams might feel that way.

Comments
Topics mentioned in this article
Tennis Tiger Woods Leander Paes Maria Sharapova Sania Mirza US Open 2011
Get the latest updates on Fifa Worldcup 2022 and check out  Fifa World Cup Schedule, Stats and Live Cricket Score. Like us on Facebook or follow us on Twitter for more sports updates. You can also download the NDTV Cricket app for Android or iOS.