The Indo-Pak pair, who took the world by storm by reaching the US Open final in 2010, will be coming together for the new season, commencing with ATP Tour in Chennai. 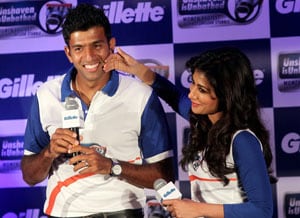 Happy to be reunited with doubles partner Aisam-ul-Haq Qureshi of Pakistan, Indian tennis player Rohan Bopanna on Tuesday exuded confidence of doing "extremely well" in the upcoming season, starting in January next year.

"It is great for me to get reunited with Qureshi and I am really looking forward to continue (the partnership). It is (also) a very positive sign and we can do extremely well (in next season, beginning January)," he told reporters here on the sidelines of "Unshaven is Unbathed" movement launched by Gillette.

The Indo-Pak pair, who took the world by storm by reaching the US Open final in 2010, will be coming together for the new season, commencing with ATP Tour in Chennai.

Bopanna parted ways with Qureshi in 2011 to partner compatriot Mahesh Bhupathi, keeping an eye on 2012 London Olympics. The Pakistani united with Jean-Julien Rojer.

A haywire and not-too-impressive last season for both Bopanna and Qureshi prompted them to announce their reunification for the next season.

Even though Bopanna reached a career-high individual doubles ranking of world number three, playing with a string of partners, the Bangalore-lad failed to qualify for London's Barclays ATP World Tour Finals.

Comments
Topics mentioned in this article
Tennis Alisa Kleybanova Rajeev Ram Rohan Bopanna Su-Wei Hsieh Anastasia Pavlyuchenkova Aisam-Ul-Haq Qureshi Serena Williams Somdev Devvarman US Open 2011
Get the latest updates on Fifa Worldcup 2022 and check out  Fifa World Cup Schedule, Stats and Live Cricket Score. Like us on Facebook or follow us on Twitter for more sports updates. You can also download the NDTV Cricket app for Android or iOS.