Pavlyuchenkova beats Schiavone at US Open 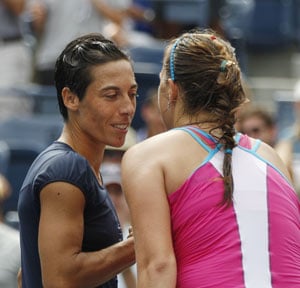 The 20-year-old Pavlyuchenkova led Schiavone 6-1, 4-1 in her first Grand Slam quarterfinal at the French Open earlier this year before the Italian rallied for victory.

There were 16 breaks of serve in 31 games in the match. The two players combined for 21 double-faults.

The 31-year-old Schiavone won last year's French Open and lost in the final this year.

Comments
Topics mentioned in this article
Tennis Caroline Wozniacki Francesca Schiavone Shahar Peer US Open 2011
Get the latest updates on ICC T20 Worldcup 2022, check out the Schedule and Live Score. Like us on Facebook or follow us on Twitter for more sports updates. You can also download the NDTV Cricket app for Android or iOS.