Pakistan was given special approval in March to organize its Asia-Oceania Group II tie against New Zealand in Yangon, Myanmar, for security reasons. 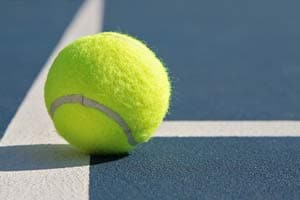 Pakistan will take its fight for an appeal against awarding a Davis Cup tie to New Zealand due to an unplayable grass court as far as it can.

A day after the Davis Cup committee rejected a request for a hearing, the Pakistan Tennis Federation said on Wednesday it will appeal the decision to the International Tennis Federation's board of directors.

"It's a disappointing decision," PTF secretary Mumtaz Yousuf said. "We will definitely file an appeal in due course."

Pakistan was given special approval in March to organize its Asia-Oceania Group II tie against New Zealand in Yangon, Myanmar, for security reasons. Last month, Pakistan won the first singles and was leading in the second singles when the referee stopped the tie and awarded it to New Zealand. The PTF wants to resume the tie from where it was left off.

But the ITF's Davis Cup committee, in a statement, said the "Pakistan Tennis Federation did not organize the tie to the required standards."

The committee said the referee tried to continue the tie on the practice court after deciding the match court was of poor quality.

"Following the deterioration of the second court, specifically during the second match, the referee determined that this court was now unplayable and a risk to player safety," the committee said in a statement.

"The referee also deemed that the court would not become playable in the next 24 hours due to its poor condition, and awarded the tie to New Zealand."

According to Davis Cup regulations, the referee can call off a tie and award the victory to the visiting team if the home team fails to provide a playable court and "the referee's decision is final."

Last month, Pakistan also tried to convince ITF officials to hold a hearing by sending star player Aisam-ul-Haq Qureshi to London, where he gave a 90-minute presentation about Pakistan's stance.

Comments
Topics mentioned in this article
Tennis US Open 2011 Anastasia Pavlyuchenkova Somdev Devvarman Serena Williams Alisa Kleybanova
Get the latest updates on ICC T20 Worldcup 2022 and CWG 2022 check out the Schedule, Live Score and Medals Tally. Like us on Facebook or follow us on Twitter for more sports updates. You can also download the NDTV Cricket app for Android or iOS.