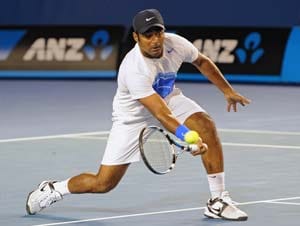 Leander Paes and his Italian partner Daniele Bracciali on Thursday stormed into the semi-finals of the Thailand Open in Bangkok after defeating Colombian pair of Juan Sebastian Cabal and Robert Farah in a three-set thriller.

The second seeded Indo-Italian duo emerged 6-7(4) 7-6(8) 10-8 winners in the quarterfinal match that lasted two hour and two minutes. They play third seeded pair of Jamie Murray of Scotland and John Peers of Australia in the semi-finals.

Meanwhile, in the Malaysia Open in Kuala Lumpur, Somdev Devvarman and his South African partner Rik De Voest scored an upset win over second seeds Nenan Zimonjic of Serbia and Julien Benneteau of France in the quarter-finals.

The duo of Somdev and de Voest came from behind to win 3-6 6-4 10-7 in the quarterfinal match that lasted one hour and 12 minutes.

Comments
Topics mentioned in this article
Tennis Serena Williams Somdev Devvarman Rik De Voest Anastasia Pavlyuchenkova Leander Paes Alisa Kleybanova Daniele Bracciali US Open 2011
Get the latest updates on India vs Australia Series, check out the India vs Australia Schedule for 2020-21 and Ind vs Aus live score . Like us on Facebook or follow us on Twitter for more sports updates. You can also download the NDTV Cricket app for Android or iOS.