A Djokovic-Nadal semifinal would normally be the feature act, but for success-starved home fans, it will be the clash of Canadian compatriots Milos Raonic and Vasek Pospisil that will take most attention. 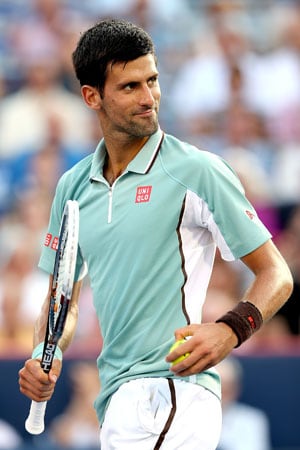 Novak Djokovic and Rafael Nadal swept into the semfinals of the Rogers Cup with rapid victories on Friday, though their upcoming semifinal will for once take second billing to an all-Canadian affair in the other half of the draw.

A Djokovic-Nadal semifinal would normally be the feature act, but for success-starved home fans, it will be the clash of Canadian compatriots Milos Raonic and Vasek Pospisil that will take most attention.

The tournament - once called the Canadian Open - was guaranteed to have its first home finalist since Robert Bedard in 1958.

"It means a lot, not just to us, but to Canadian tennis," Raonic said. "It's an opportunity, a great, great moment. At the same time, it's another tennis match. That doesn't change."

Pospisil became the first Canadian since Mike Belkin in 1969 to reach the final four of the event when Russia's Nikolay Davydenko retired due to illness. Pospisil led 3-0 in the first set when Davydenko stopped playing.

Raonic, the 11th seed, rode the spirited support of the center court crowd for a 7-6 (2), 4-6, 6-4 victory over Ernests Gulbis, the Latvian who knocked out second-seeded Andy Murray on Thursday.

"I was expecting it to be very difficult," Raonic said. "He had a great win yesterday. He's especially dangerous when he gets matches under him and he's feeling well. He wasn't really making many errors."

It will be the first meeting between Raonic and Pospisil in an ATP Tour tournament. Pospisil holds a 3-1 edge in their four meetings in lower level events, but Raonic took the most recent match in 2010.

"Exciting match," said Pospisil. "Two Canadians in the semifinal, one guaranteed to be in the final. It's a historic moment for tennis in Canada.

"We know each other very well. Since we were little kids. You've got to give the edge to Milos, for sure. I have the edge in terms of head-to-head (matchups), but things have changed in the last two years. My run here doesn't change anything here in terms of that. But we'll see how it goes."