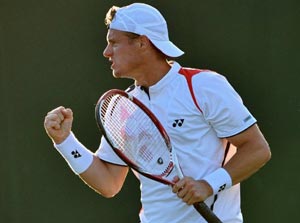 The U.S. Tennis Association said on Wednesday that the eighth berth would be given to the winner of an eight-player tournament this week.

The 30-year-old Hewitt won the 2001 U.S. Open and 2002 Wimbledon titles, but is ranked 165th after a series of injuries. He received his entry as part of a reciprocal agreement that allows the USTA to select a player for a wild card into the Australian Open.

The 22-year-old Young, ranked 89th, had to apologize to the USTA in April after he posted an obscenity-laced message on Twitter criticizing the organization for not automatically giving him its wild card into the French Open. Benneteau is France's nominee for the U.S. Open through that reciprocal arrangement.

The 28-year-old Ginepri was a semifinalist at Flushing Meadows in 2005, but has fallen to No. 305 in the rankings because of injuries. The 19-year-old Harrison, ranked 78th, reached the second round of the U.S. Open last year before losing in a fifth-set tiebreaker.

The 18-year-old Sock defended his title at the USTA boys' 18s national championships on Sunday to earn a wild card for the second straight year. In 2010, Sock became the first American to win the U.S. Open boys' singles title since Andy Roddick in 2000.