Martina Hingis' husband Thibault Hutin is in the process of filing a police complaint following an incident at the couple's apartment in the village of Feusisberg. 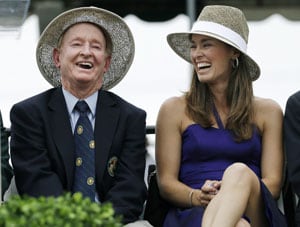 The husband of former tennis champ Martina Hingis (in file pic with tennis great Rod Laver) has accused his wife and mother-in-law of assaulting him and has left Switzerland fearing for his life, the Blick daily reported Thursday.

Police in the northern Swiss canton of Schwyz confirmed to AFP that Thibault Hutin was in the process of filing a complaint following an incident at the couple's apartment in the village of Feusisberg.

"He has started the process of filing a complaint, but it hasn't been finished yet," he said, not specifying the nature of the incident or who the complaint was being filed against.

Hutin, however, told Blick that his 32-year-old wife, the former world number one, her mother and her mother's boyfriend had "beaten and scratched" him.

The boyfriend had also struck him in the head with a DVD player, he said, adding that he was so "terrified" he had fled to Paris.

"I'm really afraid. What will be next, a bullet?" he asked in the interview.

Hingis, the winner of five Grand Slam singles titles, came back from six years of retirement in July this year to play doubles.

Hingis, who could not be immediately reached for comment, was reportedly in Tokyo to take part in a 30th anniversary celebration for the WTA tournament.

She had originally been set to take part in the Pan Pacific Open women's tennis tournament in Tokyo this week, but withdrew for "personal reasons," organisers said earlier this month.

Comments
Topics mentioned in this article
Tennis Serena Williams Somdev Devvarman Alisa Kleybanova Anastasia Pavlyuchenkova Martina Hingis Venus Williams US Open 2011
Get the latest updates on Fifa Worldcup 2022 and check out  Fifa World Cup Schedule, Stats and Live Cricket Score. Like us on Facebook or follow us on Twitter for more sports updates. You can also download the NDTV Cricket app for Android or iOS.