Novak Djokovic wants more. More of everything, on the tennis court and off. He's ranked No. 1 and is 64-2 in 2011, and sees room for improvement. 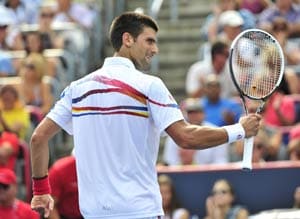 More of everything, on the tennis court and off.

He won three of the four Grand Slam titles this year - at the Australian Open, Wimbledon and U.S. Open - and is talking about adding to his collection.

"There is a lot more to prove, a lot more tournaments to win," Djokovic told reporters at the Empire State Building on Tuesday, a day after he beat Rafael Nadal in the final at Flushing Meadows.

And then there's this: Djokovic gained plenty of attention for his spot-on impersonations of other players (Nadal, Andy Roddick and Maria Sharapova, among others), and now he wants to pursue acting.

"Yeah. Why not? I might do something if I have time soon. And I would like to. I just think show business is something that attracts me, that I really like watching, that I like being a part of. It's part of my personality," Djokovic said after making the rounds to various morning talk shows with a couple of days' worth of stubble on his face and the benefit of about three hours' worth of sleep.

The 24-year-old from Serbia didn't provide details or indicate whether he'd like to wind up on TV or in a movie; he did say he already has a couple of offers to consider.

"This the way I see things off the court. If I embrace them, if I accept them as something that can give me energy, that can make me happy, then it all goes in a positive direction," Djokovic said. "Or vice versa: You can say, 'Oh, look this is taking my attention off tennis. This is negative.' It just depends the way you look at it, and I try always to look at it in a positive way."

Just in case anyone might wonder how focused Djokovic is on his future as a thespian, he was sure to note: "I will not interfere that with my professional life."

The guy is doing pretty well at his day job, putting together what seven-time major champion John McEnroe called "the greatest year in the history of our sport, there's no doubt about it."

As impressive as Djokovic's overall record is, what's even more indicative of exactly how well he's playing is that he is 10-1 against Nadal and Roger Federer this season.

He overcame a two-set deficit, then two match points at 5-3, 40-15 in the fifth, to eliminate Federer in the US Open semifinals on Saturday, before dominating Nadal for most of the 4 hours, 10 minutes it took to complete their riveting 6-2, 6-4, 6-7 (3), 6-1 final. It's only the second time someone beat Federer and Nadal at the same Grand Slam tournament.

Against Nadal, Djokovic was treated by a trainer after the third set and twice more during the fourth for pain in a muscle between his ribs, an aching back and leg cramps.

"To be honest, there was doubts in my mind after the third set," he said Tuesday, "because physically I wasn't there. I wasn't fresh."

His serve speeds dropped from around 120 mph to the 90s - "quite weak," Djokovic called it - during the fourth set, which actually might have thrown off Nadal.

"I guess he was a little confused as well - that's what I felt - on his return games because he was expecting the ball to come faster," Djokovic explained.

He improved to 6-0 against Nadal this year, all in tournament finals, and on three different surfaces: hard courts, clay and grass. Djokovic said those victories give him a "psychological advantage" against a player who preceded him atop the rankings and has 10 Grand Slam titles of his own.

"Maybe this is my year. Roger had a couple of years where he was winning two or three Slams. Rafa had that last year. God knows what's going to be next year," Djokovic said, shaking his head.

Then, thinking about all that he's accomplished and all that is to come, he chuckled as he said: "This is going to be extremely hard to repeat, that's for sure."

Comments
Topics mentioned in this article
Tennis Sania Mirza Maria Sharapova Novak Djokovic Leander Paes US Open 2011 Tiger Woods
Get the latest updates on Fifa Worldcup 2022 and check out  Fifa World Cup Schedule, Stats and Live Cricket Score. Like us on Facebook or follow us on Twitter for more sports updates. You can also download the NDTV Cricket app for Android or iOS.