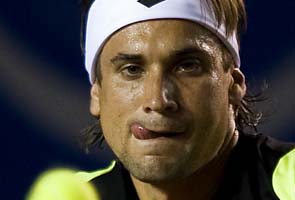 The 31-year-old Spaniard, who was beaten in his opening match at last week's Barcelona Open, will play Romanian journeyman Victor Hanescu, who accounted for sixth-seeded Frenchman Benoit Paire 7-6 (7/2), 6-4.

Ferrer, who missed the Monte Carlo Masters after injuring a thigh in the final of the Miami tournament in March, is looking to get some valuable court time prior to the French Open later this month.

The Spaniard had looked to be cruising to a win when he led by a set and 4-2 in the second but then lost his concentration.

"I lost that game and the set, In the third it was tough to break him," he said.

"It was a very good match to get through but I certainly have to lift my level for the next round. Hanescu is a good player even if I've beaten him before (he has beaten hom on both occasions they have played). I have to play well."

He was brought in as a late replacement for Argentine Juan Martin Del Potro, the holder who could not play at their edition due to a stomach virus.

Kuznetsova, ranked 45 in the world and a wild card entry, said that while she was happy to win, she was not particularly impressed with how she got through over her rival, who is ranked 117th.

"I was a little lazy at the start, it was an OK win but I'm not so happy about it. I like to play on clay but this court feels a little bit slow," she said.

The Spanish-trained Russian who now lives in her homeland but says she still needs Spanish-atyle coaching, will play Romina Oprandi, who beat China's Peng Shuai 6-1, 6-3, in the quarter-finals.

Kuznetsova has won all three meetings with the Swiss, but they last played seven years ago.

"She's got a very different game, she doesn't give you any rhythm," said the 27-year-old, who won the US Open in 2004 and Roland Garros five years later.

"She's very unpredictable and I will have to play much better than I did today."

Three of the four seeds in the women's singles advanced to the quarter-finals, led by number three Anastasia Pavlyuchenkova, coached part-time by former great Martina Hingis.

Monica Puig of Puerto Rico ended the 2010 French Open champion Francesca Schiavone's hopes of a second successful title, after winning in Marrakech last Sunday, as she beat the Italian 6-3, 6-2.

Comments
Topics mentioned in this article
Tennis US Open 2011 David Ferrer Stanislas Wawrinka Anastasia Pavlyuchenkova Alisa Kleybanova Serena Williams Somdev Devvarman
Get the latest updates on ICC T20 Worldcup 2022 and CWG 2022 check out the Schedule, Live Score and Medals Tally. Like us on Facebook or follow us on Twitter for more sports updates. You can also download the NDTV Cricket app for Android or iOS.